Under the proposal, the city is seeking to acquire 11 properties mostly on Ryle Avenue between Ryle Road and West Broadway.

Properties on Ryle Avenue are furthest away from the Passaic River. Government officials have opted to not acquire properties that are next to the river. The latest proposal also includes the acquisition of the Kanas Fried Chicken place next to the river at the end of the West Street bridge.

Council members rejected the plan to acquire the properties in late September. On Tuesday night, council members were divided on the proposal.

Fressie’s property’s value is guaranteed to increase if the rest of Ryle Avenue is turned into open space.

Jackson also noted Torres was pushing to get the acquisition through even after forfeiting his office after taking a guilty plea for stealing from taxpayers. 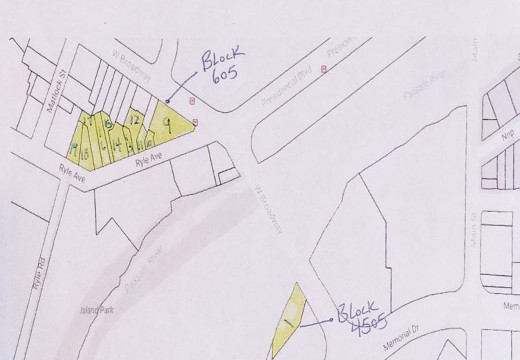 Map of properties slated for purchase as part of the revised proposal.

“This, right here, my friends, is a travesty,” said Jackson. He also said the city is not providing the council with a full plan for the area. For example, Jackson elicited responses from Gomez, that made it clear the government was seeking to pave the way for housing with retail at the site of a collapsed mill building and at the existing burned-out mill structure on the corner of Ryle Avenue and Ryle Road.

Gomez also said the city is in talks with a developer to rehabilitate the historic Ryle Hotel, the red brick building at the start of the West Street bridge.

Andre Sayegh, 6th Ward councilman, took an opposite stand to Jackson. He said the city risks losing the $1 million it secured from the state for the purchase of these properties.

“We wouldn’t want the million-dollar squandered,” said Sayegh. This earned rebuke from Jackson, who stated the government squandered a million by approving Torres’ recreation trailer at Buckley Park.

Sayegh said the properties on Ryle Avenue have been “fallow” for as far as he can recall, going back a decade plus.

McKoy suggested the city should pursue developing the riverfront which will produce more economic benefit for the Silk City than merely acquiring land for open space. He supported acquiring and developing the properties closest to the river.

“The river is what’s going to drive economic development more so than open space or park space,” said McKoy.

The properties being acquired have an assessed value of $1.28 million.

The second largest property on Ryle Avenue that’s closet to the Passaic River is already owned by the city. 50-68 Ryle Avenue was the former site of a large mill building. The city has the ability to acquire 70-78 Ryle Avenue which was approved for a used car dealership. Owner of 70-78 Ryle Avenue promised to sell the property whenever the city is willing to purchase at a fair market rate.