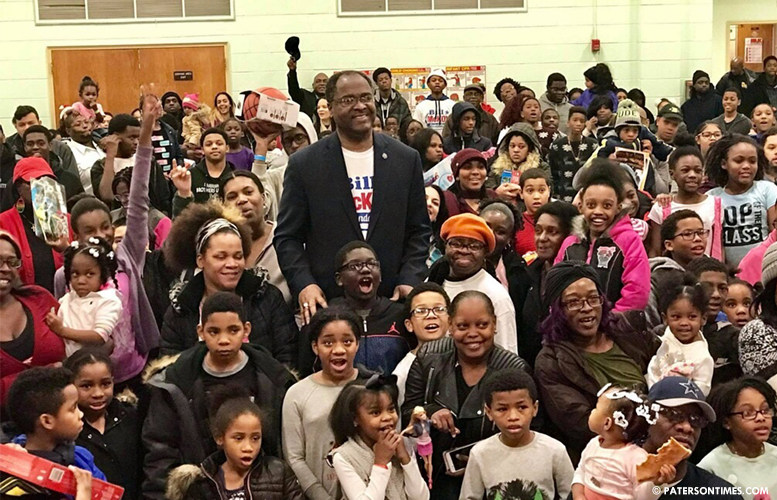 Xboxes. iPads. Bicycles. These are just some of the toys received by young people for Christmas at the Martin Luther King, Jr. School on Saturday. Councilman William McKoy distributed the toys to 300-400 young people.

“Every child goes away with at least one gift. Yesterday, some kids left with two or three,” said McKoy. “It was just thrilling to see the expression on their faces.” After getting their selected toys, the young people also took part in raffles for a chance to win a “wow” gift.

A dozen and half bicycles, 2 iPads, and 2 Xboxes were the “wow” gifts on Saturday. A pair of boys won the Xboxes, said McKoy. A girl won a boy’s bicycle. “I’m going to give this to my brother because I already have a bike and he doesn’t have one,” the girl said after winning the raffle related the councilman.

“That was the message we were trying to give,” said McKoy, 3rd Ward councilman. The message was one of sharing. Even if the winner is not able to use a won item, she can give it to a family member, a friend, or a neighbor who can make use of it, he said.

Children ranged from the very young to high school students, said the councilman. He often shares an anecdote from the time he was a youngster growing up in impoverished Jamaica that inspired him to give out toys every year for Christmas.

“I always wanted this red bike, but I never got it,” said McKoy. For the past 14 years, the councilman has collected toys and raised funds through the Bill McKoy Foundation, to conduct his toy giveaway.

An important part of the giveaway is always the bicycles. He says bicycles gives young people a sense of independence. It also allows him to give young people something he never had growing up.

McKoy’s family moved to Paterson when he was a teenager. He attended John F. Kennedy High School. He went on to obtain an accounting degree from William Paterson University to ultimately become the chief auditor at the Jersey City school district. He is running for mayor in next year’s municipal elections.

The crowd at this year’s giveaway was slightly less than last year, said the councilman. He attributed the slight reduction to the rain that kept some families home.

“The enthusiasm was even greater,” said McKoy. His giveaway is a family affair. Young people and their families are served a meal at the event.