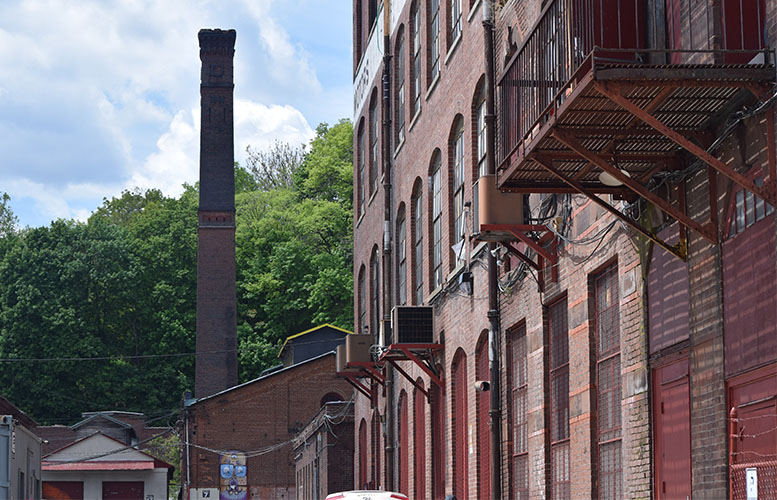 The Art Factory received approval for a $9 million renovation project that will transform the series of 19th century industrial buildings close to the Great Falls National Historical Park into a cultural attraction.

Under the plan approved on Wednesday night, the complex — 25 separated or connected buildings that contain 232,000 square feet of space — will house retail stores, exhibition spaces, light industrial spaces, office and studio spaces, restaurant and cafe, and 19 overnight sleeping units. There’s also a two-car trolley service to transport visitors between the Art Factory at 70 Spruce Street and various buildings including the parking garage on Ellison Street.

David Garsia, owner of the Paterson Art Factory, has already turned the complex into a regional attraction through its annual Art Walk. His buildings serve as host to a diverse set of small businesses from artisans to lawyers.

In fact, Garsia’s complex was such an attraction that the city had to shut him down in 2015 prior to a Christmas event for fear the hundreds of people expected to attend will create a fire hazard. The Art Factory is known for its Christmas party and Oktoberfest event.

Municipal officials said Wednesday’s approval does not impact the trial at the court. Officials said the two are separate issues. However, in the plan approved on Wednesday night, the city stipulates that the property has to have a certificate of occupancy to verify each building being occupied meets building code. Furthermore, every person or business occupying space in the buildings have to obtain certificates.

Garsia’s attorney has argued throughout the multiple court battles with the city its tenants or clients are not required to obtain separate certificates. The city issued large numbers of summonses to both Garsia and tenants due to lack of certificates that resulted in the court fights.

Both sides are scheduled for a court hearing next week.

Garsia said the trolley services will have an outer and inner loop to transport visitors.

“It’s going to be for everybody,” said Garsia. “We’re tying the whole city together.”

Each trolley will have a 35-person capacity, he said. For a total capacity of 70 passengers. Rides will be free, he said.

Visitors will be directed to park at the Ellison Street parking garage run by the Paterson Parking Authority, he said. He needed to include the trolley service to make up for lack of parking spaces at the Art Factory, according to officials.

“I think if we’re looking to bring more businesses to our community and to attract visitors we have to make sure we have things in place that allows people to go from one place to the next,” said Lilisa Mimms, vice chairwoman of the Paterson Planning Board. “I think it’s an attraction.”

The Paterson Parking Authority is also looking to restore one trolley by 2019 to tie the Great Falls and the South Paterson section which is filled with ethnic restaurants.

Garsia did not have an estimated finish timeline for the project. “It will be ongoing. We don’t anticipate to finish everything we have for many years,” he said.

The buildings which are now known as the Art Factory were constructed in circa 1840 for the American Hemp Company which produced ropes. Structures range from 1-4 stories in height.

In 1851, the American Hemp Company was reorganized as the Dolphin Jute Mill to produce twisted jute carpeting. The jute mill operated into the late 1950s. After that the complex was used mostly for storage.

The complex became the Art Factory sometime after 1978, according to government records.