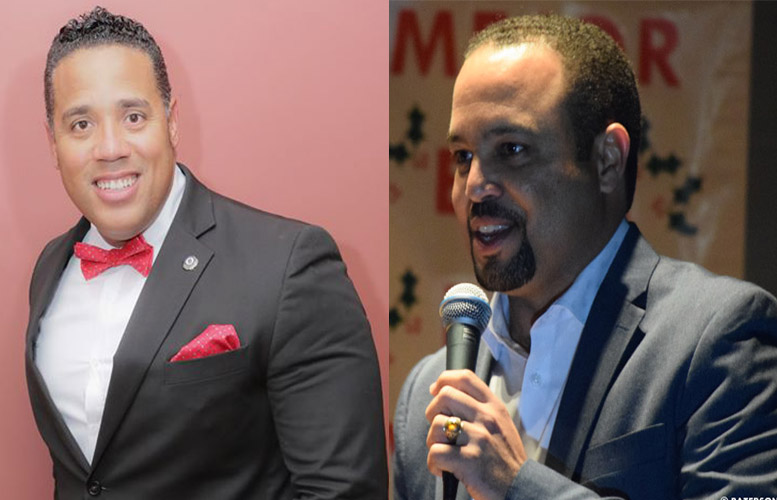 Former school board member Pedro Rodriguez slammed Alex Mendez calling the councilman a “liar” for claiming to have collected 3,800 signed petitions for this year’s mayoral race. His criticism sprang from a video Mendez distributed in late December.

In that video, Mendez expressed gratitude to 3,800 registered voters for signing his nominating petitions.

“He flat-out lied,” said Rodriguez (pictured, right) referring to the two-minute video. He pointed to the 3,000 petitions Mendez picked up from the City Clerk’s Office. Mendez could not have collected 3,800 signed petitions if he only picked up 3,000 from the city clerk, he said.

Mendez picked up 3,000 petitions in three separate trips to the City Clerk’s Office in December, according to municipal records. In response to Rodriguez’s criticism, Mendez said his team made copies of petitions to continue the campaign momentum by collecting names and signatures to build a database.

“After we collected 3,000 petitions, we made copies, 1,500 more copies, to continue the momentum to allow the team to continue collecting petitions for our personal records,” said Mendez. “Now, we have a lot more than 3,800 signed petitions.”

Mendez and Rodriguez have submitted the needed number of petitions to be on the ballot in May. 815 signed petitions are needed to qualify as a candidate. When told Mendez’s campaign made copies to continue the momentum, Rodriguez remarked: “Sure, sure. If he wanted to make copies, he would have made copies from the get-go.”

Rodriguez said Mendez would not have made three visits — picking up 1,000 petitions each time — to the clerk’s office if he was making copies. The clerk’s office said it does not limit the number of petitions a candidate is able to pick up.

“The problem is when somebody lies they usually try cover it with another lie. That’s what defines a pathological liar,” said Rodriguez.

“We’re not going to pay attention to his offensive comments. He’s been doing that for years. He’s a loser. He’s not real competition,” retorted Mendez. He said Rodriguez won a school board seat with small number of votes in 2009, other than that he has been “losing left and right.”

Rodriguez pointed out Mendez lost in 2009. Mendez was running for a school board seat as well. Mendez said Rodriguez lost in 2012.

Rodriguez ran against disgraced councilman Anthony Davis for the 1st Ward council seat that year. He came close to winning the council seat. On Friday, Rodriguez said Davis infused bribe money into his campaign to hold onto the seat.

Mendez also lost in 2012. He ran against William McKoy for the 3rd Ward seat and was defeated. “He lost one on one with McKoy,” said Rodriguez. He said in the 1st Ward race there was a third candidate who divided the vote. “I lost by 40 votes.”

Mendez said he was the second highest vote-getter in that race against the longest serving member of the city council. McKoy is also running for mayor.

Mendez has come a long way from that 2012 loss. In successive races, he has been the highest voter-getter. So has Rodriguez. Big turnouts at Rodriguez’s recent campaign events have stoked fear among his opponents. Few expected Rodriguez to have 700 people at his campaign kick-off in December.

Both Mendez and Rodriguez are in a field with a dozen candidates seeking the mayor’s seat. Both men have been vigorously battling each other for the Dominican vote. Dominicans make up the largest Hispanic group in Paterson.

60-percent of Paterson residents are of Hispanic heritage. Both Rodriguez and Mendez are of Dominican extraction. Both men are strong candidates, say political strategists. However, neither is likely to win without the unified support of the Dominican community.

Some of Mendez’s other critics also watched the video which has thousands of views. “I saw that. He’s been wrestling with credibility questions for some time,” said councilman Andre Sayegh. “This just fuels that belief that he’s not telling the truth.”

Sayegh, who is also running for mayor, referred to the school uniform voucher controversy in summer of 2017. Mendez was criticized for tying uniform coupons for poor students to his mayoral campaign.