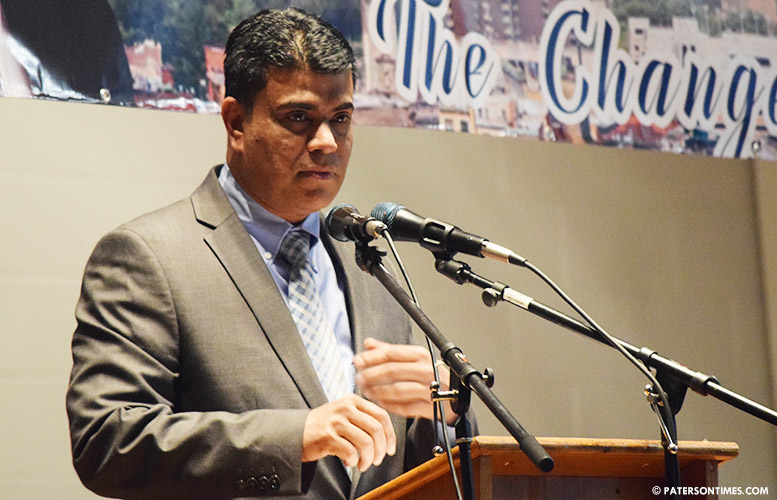 “For too long, this great city has been suffering from corruption, crime, and high taxes,” Akhtaruzzaman told more than 500-600 people, who packed the church’s community center. “I have a plan. I have a plan for long-term growth and renewal.”

His more immediate plan to return to the City Council was on display at the kickoff event. Speaker after speaker from the city’s Bangladeshi-American community preached for unity to repair the divisions that became apparent in the 2nd Ward election two years ago. Councilman Shahin Khalique narrowly defeated the incumbent Akhtaruzzaman in an election that was rife with irregularities and voter fraud.

Akhtaruzzaman filed in court to overturn the election outcome. A judge, after hearing almost a year worth of testimony, ruled against him granting the victory to Khalique. In recent months, Akhtaruzzaman has refused to criticize his once arch enemy.

Akhtaruzzaman’s friend and advisor Aheya Khan pointed to the huge crowd (there was a chair shortage) to assert, “It shows the community is united.”

Khan pointed out some of Khalique’s staunchest supporters attended the kickoff.

Khan acknowledged his friend will need more than just the Bangladeshi-American vote to win an at-large seat. He said there are 15,000 Bengalis in the city. There’s 3,000 votes in the 2nd Ward in that community, according to an assessment of past elections. There may be another 500 in the 1st Ward. The Bengali community is concentrated in the Totowa and Hillcrest sections. The Totowa neighborhood straddles the 1st and 2nd Wards.

Akhtaruzzaman had small groups of Hispanic and African-American supporters at the event. His alliance with former school board member Pedro Rodriguez, who is running for mayor, may help him secure Hispanic votes.

“Pedro and I see things eye to eye,” said Akhtaruzzaman. With Akhtaruzzaman’s support Rodriguez is hoping to secure the bulk of the Bengali vote.

“We’re going to blow this election wide open,” said Rodriguez before he went up on stage to lead the crowd in cheering “Mohammed! Mohammed! Mohammed!” There was talk of both men gathering 2,000 mail-in votes ahead of election day to secure an edge in the non-partisan competitive races.

Both men promised to “fight hard” for homeowners by stabilizing taxes.

Akhtaruzzaman is also appealing to Muslims elsewhere in the city, mostly in the southern part of Paterson. He said he has been campaigning and hitting the pavement in South Paterson.

The former councilman is among a dozen people seeking three available at-large council seats. One of the three seats, that of Alex Mendez’s, is certain to be filled by a challenger. Incumbent Maritza Davila faces an uphill battle as she defends her seat. It remains an open question whether incumbent Kenneth Morris plans to defend his seat.

“I have a proven record since I was your 2nd Ward councilman,” Akhtaruzzaman told his supporters. “I will do the same thing I did for the 2nd Ward.”

As his accomplishments, Akhtaruzzaman cited the business curfew ordinance that reduced non-fatal shooting in designated hotspots by almost 80-percent the first year it was in effect, the special police ordinance that led to the hiring of part-time officers, and the temporary stationing of police cameras in some high crime areas.

“The other day, as I was campaigning on North 6th Street, a mother approached me. She said, she’s afraid to send her children outside to play. Think about it. You’re feeling unsafe in your own backyard. Enough is enough,” said Akhtaruzzaman.

Akhtaruzzaman wants to see an expansion of the special police program. “We need to increase police presence by hiring part-time police officers who cost less,” he said. Also, he plans to push for more recreation funding and lobby the Board of Education to keep buildings open beyond school hours for recreation.

The former councilman was first elected to the City Council in 2012. He defeated a 12-year incumbent in an upset victory becoming the first Bengali elected to public office in Paterson. He arrived in the U.S. from his native Bangladesh in 1986. After attending John F. Kennedy High School, he earned a computer science degree from the State University of New York at Stony Brook, he said.