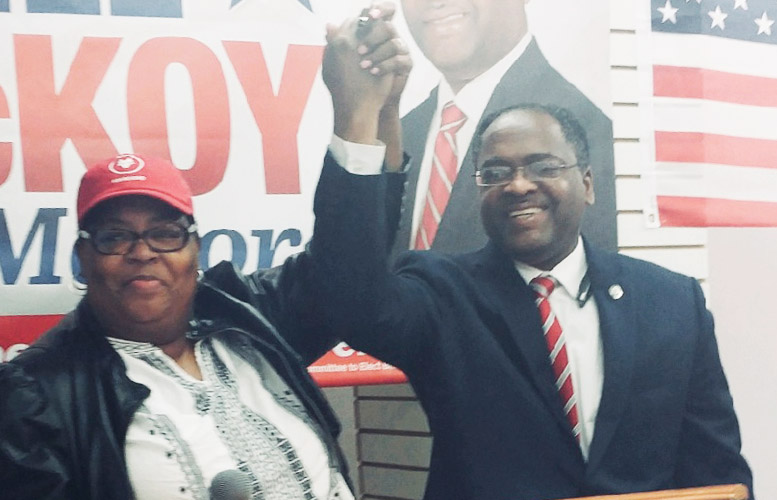 Freeman put her support behind McKoy at the councilman’s campaign headquarter opening event on Saturday afternoon.

“It is with a heavy heart that I have decided not to run for mayor of this great city,” said Freeman (left) while endorsing McKoy. “When you look at the remaining mayoral candidates in the race there is only one candidate who has the integrity to run our city efficient[ly] and honestly.”

McKoy described Freeman as a “strong community leader” and “look[s] forward” to working with her. “As mayor I will make sure that everyone has a seat at the table and that all are heard,” he said.

Freeman’s chances of winning the mayor’s seat in a race with a dozen, many of them well-established, candidates were slim, according to political strategists. She picked up petitions with the intention to gather the needed 815 valid signatures to get on the ballot in May.

“I actually had 600 signed. That wasn’t going to be a problem for me,” said Freeman. Her endorsement is similar to some of the candidates, who dropped out of the race four years ago to endorse ex-mayor Jose “Joey” Torres.

Torres sought to consolidate support by eliminating Hispanic candidates in the race. He also provided encouragement to African-American candidates to remain in the race to divide the black vote. Some of those candidates who backed Torres either overtly or otherwise ended up with jobs in his administration.

McKoy will need to eliminate several African-American candidates to consolidate black support behind him.

Freeman first publicly stated she would be seeking a run for office while protesting the Well of Hope last year.

McKoy criticized the Well of Hope. However, when it came time to pull funding from the troubled organization, the councilman balked.

“My fight with it was the needle exchange program,” said Freeman when asked about McKoy’s vote. “The other services they provided were needed.”

The measure seeking to take away $93,000 from the Well of Hope was for services unrelated to the needle exchange program.

“I don’t see his vote as problematic,” said Freeman. She would have viewed it as problematic if the funding was tied to the needle exchange program.

“My heart is telling me, Bill McKoy is the best one,” said Freeman. “He’s the one for the city at this moment.”