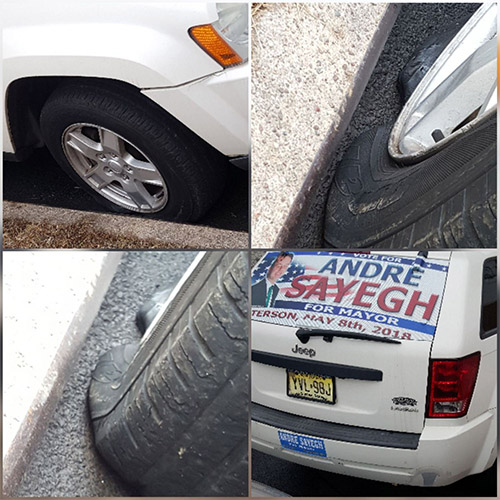 An ardent supporter of councilman and mayoral candidate Andre Sayegh’s found the tires of his vehicle slashed over the weekend.

Sayegh said the supporter’s tires on a vehicle that had a large rear decal promoting the councilman’s candidacy for mayor were slashed sometime between Saturday night into Sunday morning.

“His car had to bear the brunt of somebody’s retaliation,” said Sayegh on Wednesday morning. He believes the tires were slashed because it had the decal promoting his candidacy.

Sayegh was not sure whether the victim filed a police report. He did not have the specific location of where the vehicle was parked at the time of the vandalism.

These were not the first tires slashed ahead of what is expected to be an intense election. Five months ago, vehicles promoting the candidacy of another mayoral candidate councilman Alex Mendez were slashed.

There were suggestions Mendez and Rodriguez’s supporters were targeting each other. Police investigated the incidents and arrested city resident Francisca Nunez.

Nunez claimed she was innocent.

The rear windshield decals are popular with Rodriguez and Mendez supporters. Sayegh’s campaign is not officially providing these decals to supporters. In this case, the supporter decided to create the decals.

Sayegh said the supporter hoped to create many more for others. This supporter is now “discouraged,” said the councilman.

The vehicles with campaign decals parked on the street become easy target for vandals from opposing camps.

“I’m running to win this race. Whoever did this is running scared,” said Sayegh. He said whichever campaign is behind the slashing is engaging in “gutter politics.”