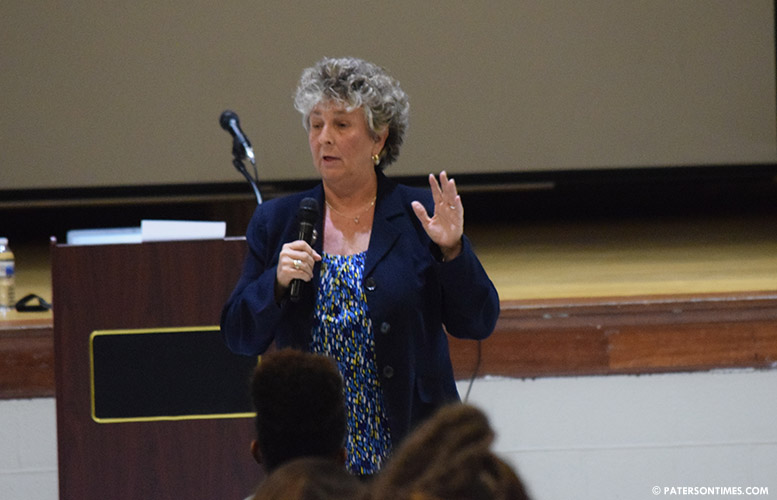 The school board selected Eileen Shafer to lead the city’s school district on Wednesday night. She was selected from a list of three final candidates. Her appointment was met by sustained cheers and applause from dozens of parents and community leaders at the district headquarters.

Shafer was not in the room when the school board voted to appoint her to a three-year term. As she walked in the room erupted in cheers as people exchanged hugs and kisses with their new superintendent.

“We have a lot of work to do,” said Shafer, who has been in the district for 25 years. “There are 28,000 students waiting for us. I will not let them down. We will change this culture. We will respond to parents. We’ll address the needs of our children.”

Shafer vowed to turn Paterson into a high performing school district. Before the vote, more than a dozen people expressed their support for Shafer, urging the school board to pick her for the job.

“It would be a disservice to the community not to bring Ms. Shafer in as the superintendent,” said Corey Teague, activist and ex-school board member. “Sometimes I email Ms. Shafer 3-4 times a day — every time she responds back.”

Shafer has built a reputation for responsiveness and action. “Let us do something different for a change,” said city resident Miguel Sosa, who works as a vice principal at Eastside High School, criticizing out of district candidates. “We have a unique opportunity to hire a highly qualified candidate from within.”

Sosa, who praised her plan to create a newcomers’ high school for non-English speaking students, urged the board to pick Shafer.

“What we need to make this district right is someone from the district. We’ve done the outsiders and they have failed the children of this district and the community miserably,” said Charles Ferrer, Sr., vice president of the Paterson Education Association, the teachers’ union.

School board members spent half-an-hour behind closed doors to make the pick. Board member Flavio Rivera said he considered the community’s opinion before casting his vote in support of Shafer.

“We had the same feelings and sentiments when it came to Ms. Shafer,” said Rivera.

Shafer, who hails from Ocean County, has served in acting capacity since former state-appointed district superintendent Donnie Evans retired in June 2017. She said on Wednesday afternoon, she spends more time in Paterson than at her hometown.

Indeed, Shafer has been praised for being visible in the community.

Shafer began her career in the district in Sept. 1992 as the supervisor of substance awareness. She later worked as human resources director, physical education supervisor, assistant superintendent, and deputy superintendent.

Shafer has a bachelor’s in science from Montclair University and a master’s in education from Slippery Rock University.

“This is my district. These are my staff. And I am not giving them to a stranger,” said Shafer. Her affection for her staff appears to be reciprocal. More than one hundred people, mostly district employees, cheered and praised her on Tuesday night when she made her case at a community forum at John F. Kennedy High School.

The other two candidates — Devon Horton, an administrator from East St. Louis public schools and Richard O’Malley, superintendent of Edison public schools – made their pitch at the same forum.

O’Malley cited problems in the district’s special education program to criticize the city’s education leaders. He told residents to demand and expect more from their district leaders.

Shafer has put in place a plan to address shortcomings in the special education program.

O’Malley also candidly talked about the perception that the contest was long decided that has plagued the superintendent search process.

Longtime school board member Jonathan Hodges criticized the process, describing it as “corrupted” during the vote on Wednesday night.

“I have to stand on my principles,” said Hodges recusing himself from the vote. He has described Shafer as a hard worker and has said she did not need any assistance to beat other candidates for the job.

School board members Vincent Arrington and Kenneth Simmons could not take part in the vote. Both of their wives work in the school system.

The New Jersey Department of Education still has to approve the appointment. Shafer is being paid $231,000 in her acting role. The board and the new superintendent still have to negotiate an employment contract that would set her salary, according to school board members.

Shafer is the first woman to hold the superintendent’s post in Paterson’s history. “This has been a long journey,” she said.