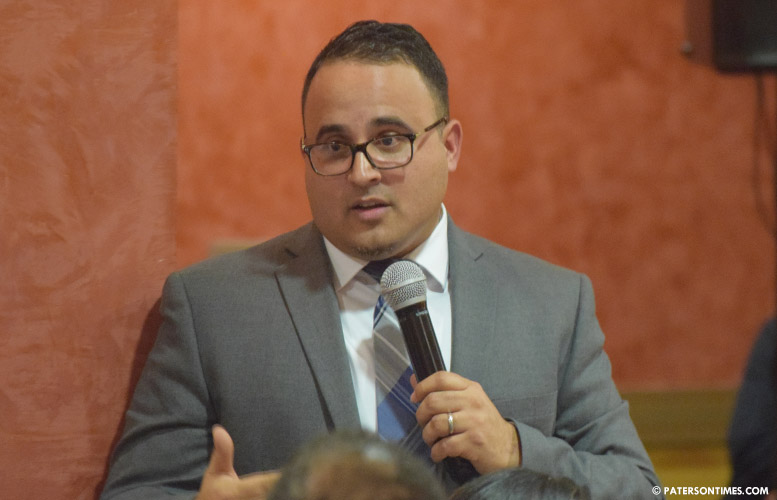 “I want to thank the people of Paterson for their support and for having confidence in me,” said Rivera.

Rivera thanked residents for giving him the opportunity to represent them on the City Council. He cited career and family obligations in opting against running for re-election.

Last year, Rivera was hired as the fiscal officer for the Passaic County Board of Social Services. He also has an 8-month-old daughter at home.

“I had to make a decision,” said Rivera.

Rivera came into office four years ago with an idealistic agenda to change the culture in City Hall and ensure basic services were being provided to taxpayers. But he leaves disillusioned after four years wrestling with mayor Andre Sayegh’s poorly run administration.

Rivera pushed to create the sewer utility to ensure nonprofit organizations and surrounding towns pay their fair share of sewer fees. His clever idea to reduce the burden on homeowners did not work because Sayegh’s team failed to correctly execute it. Nonetheless, the creation of the sewer utility boosted the city’s credit rating.

Rivera also passed a law that required developers to deposit money into an escrow account. Idea was to get developers to pay the city to review their construction plans. Again, Sayegh’s team couldn’t execute it correctly.

Rivera said he does not believe the escrow has been properly implemented.

Rivera was also the councilman who, to his shock, found Libby’s Restaurant had been failing to pay rent for years. After a public beating, Sayegh’s team, which was responsible for failing to collect the rent, recouped the rent money, approximately $73,000.

Rivera also eliminated the contract for a tax assessment company that was increasing property assessments for new buyers, leading to tens of thousands of dollars in tax hikes for new homeowners.

“I kept an eye on a lot of things,” said Rivera.

Rivera has been pushing the mayor to repair River Street, something that is likely to happen in the coming years due to the American Rescue Act funding.

Rivera did face some criticism from some of his colleagues for not backing the measure to censure Sayegh for his failures. He had publicly said he has no confidence in Sayegh, but then opted not support a no confidence measure rebuking the mayor. He pointed out the measure was symbolic and did little else than just embarrass the mayor.

Rivera said he still believes in Paterson’s potential to move on from its depressed post-industrial state, but to make that happen will require an effective administration that can execute, he said. “It depends on the administration. It depends on who is in the driver’s seat,” said Rivera.

Rivera previously served on the Board of Education.