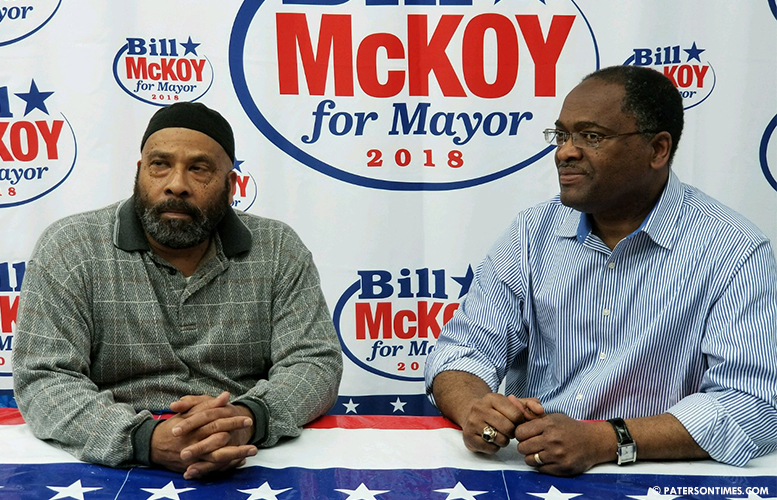 Brown made his endorsement at the councilman’s campaign headquarter.

“After careful consideration I have decided to decline this run and put my time and energy into a candidate we can all trust to fix what has long been broken. Without reservation, my family and I endorse William ‘Bill’ McKoy as the next mayor,” said Brown (pictured, left).

McKoy’s auditor background will help him stabilize municipal finances and property taxes, said Brown. He views McKoy as someone who will provide “conservative” leadership to address the city’s myriad problems.

McKoy, who has been on the council for almost 18 years, works as the chief auditor of the early childhood department at the Jersey City school district.

“It is a great honor to receive the support of a leader in our community such as Chauncey Brown,” said McKoy. He thanked Brown for his endorsement.

Brown’s bid for mayor early last year brought to the fore his 2009 bribe conviction. He was sentenced to 1 year and 6 months in federal prison for taking $13,000 in bribes from an undercover company between Sept.-Dec. 2006 in return for assistance to help secure district insurance business.

Other candidates in the race viewed Brown’s run as a longshot bid. Some wondered whether he could even collect the 815 petitions needed to get on the ballot.

“Petitions weren’t the issue,” said Brown. He was forced out of the race due to his mother’s illness, he said.

Brown was the sole Republican to put forth his name for the non-partisan mayoral race dominated by Democrats.