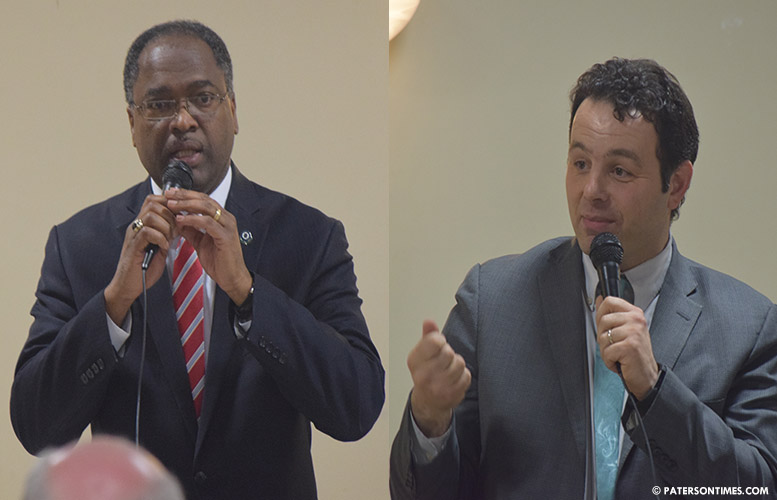 Former school board member Pedro Rodriguez attacked him for taking contributions from developers. Businessman-turned-councilman Michael Jackson slammed him for taking credit for the development of South Paterson. And councilman William McKoy ripped into his key campaign message that his relationships will assist in building a prosperous Paterson.

“You are hearing the word relationship over and over again,” said McKoy after Sayegh repeatedly mentioned his ties to congressman Bill Pascrell and governor Phil Murphy. “What’s been damaging and bad for Paterson is that it’s not what you know, it’s not what you need, it’s not what you require, it’s who you know. We have to change that.”

Municipal services should not be fast tracked to the well-connected. Every taxpayer should receive the same level of services, said McKoy. Previously, he warned the audience to watch out for the word “relationship” because it marked the “death knell for Paterson.”

Sayegh told the audience of 148 people his connection to the congressman produced flood map revisions that saved hundreds of dollars for some homeowners. He said his relationships got children in the 6th Ward a playground. A pre-school at the site of the infamous Lava Lounge was the result of a leveraged relationship. He also told the audience Murphy has promised to assist in revitalizing the once mighty industrial town.

Sayegh was one of Murphy’s earliest supporters in the city.

“Let me remind everyone. He had a relationship with Joey Torres. For two years as council president, he allowed him to get away with overtime abuse. That’s a relationship we did not benefit from,” said Sayegh of McKoy. He said McKoy “pounced” on former mayor Jeffery Jones at every chance, but failed to hold a corrupt mayor accountable. “Councilman McKoy through his relationship benefited from the Torres administration. I just want to remind everyone about that relationship.”

McKoy, who was a close Torres ally, stood up to rebut Sayegh. Until that point, the four candidates in attendance took turns standing up to answer questions posed by moderators but written on note-cards by audience members.

The creative rules of the “Town Hall” forum did not allow for McKoy to automatically rebut.  Jackson was next to speak, but yielded to let McKoy respond.

“I endorsed Joey Torres when he was running against you,” said McKoy. He described Sayegh as “unqualified” and “unprepared.” He viewed Sayegh’s juxtaposition of Torres and Jones a wedge describing it as a “plantation trick.”

“He’s been pimping this community for a long, longtime,” said McKoy.

McKoy did not need to call for an investigation. The attorney general’s office had subpoenaed videos captured by a private investigator that showed municipal employees working at the mayor’s house and his family’s leased warehouse.

“He hung his hat on that. That was his staple. He was trying to discredit Joey,” said Jackson of Sayegh. Indeed, Sayegh opposed Torres at every turn since the ex-mayor returned to office for a third term.

Jackson attacked Sayegh for taking contributions from developer Charles Florio. Rodriguez repeatedly went after Sayegh for raising large sums of money from outside developers without mentioning him by name.

Sayegh is leading his rivals in fundraising.

“This councilman is coming with strings, ropes, and chains,” said McKoy of Sayegh.

“He voted for every tax increase imaginable,” said Sayegh of McKoy. “He voted to raise our taxes 29-percent. People lost their homes because he didn’t show passion when it came time to vote down the budget.”

Sayegh has voted against tax hikes over the years. He has argued the city can solve its budget woes by promoting economic development. He cited the growth of South Paterson in the 6th Ward.

“I spend a lot of time in South Paterson. Councilman, you have to be honest, you had nothing to do with that,” remarked Jackson. He attributed the growth of South Paterson to the enterprising spirit of the different Middle Eastern groups.

“That’s been there for many years,” said Rodriguez of the South Paterson.

Sayegh has promoted growth in South Paterson. When a 27,000 square feet mini-mall opened on Main Street in the summer, the developer credited Sayegh for assisting in overcoming difficulties.

However, police data shows there was an almost 80-percent drop in non-fatal shootings in hotspot curfew zones in the first year it was in effect.

The two-hour long debate at the Crossroads Ministry Center on East 22nd Street on Thursday night attracted a larger audience than any forums four years ago.

“I think Jackson was the most honest,” said city resident Klarissia Conyers. Her sister Shanae Conyers, both women from the 3rd Ward, concurred. Both sisters said none of the other candidates corrected or disputed anything Jackson mentioned in the course of the debate.

“It was two against one,” said former councilman Ed Cotton, who supports Sayegh. Rodriguez spent the least amount of time criticizing his opponents. Another Sayegh supporter said it was three against one.

Cotton thought McKoy’s allusion to slavery was “out of place.”

Councilman Alex Mendez and police officers’ union chief Alex Cruz were no-shows at the town hall. Both men were invited by the organizers.