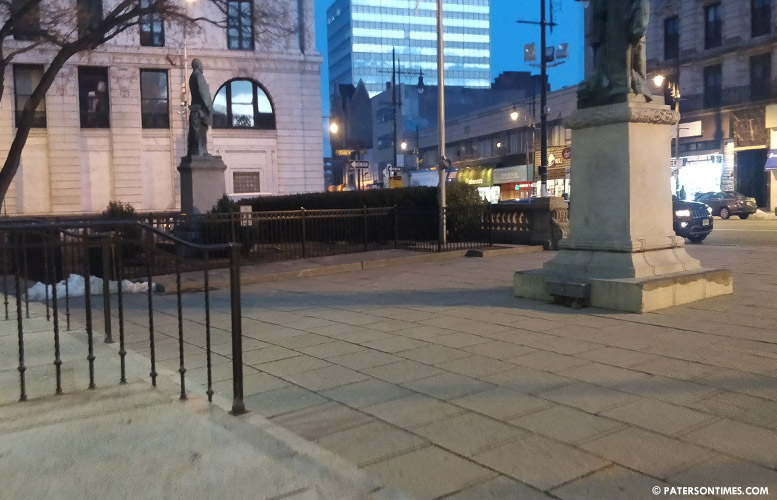 The city has removed several benches from the exterior of the historic City Hall building in downtown Paterson to clamp down on vagrants using them as stations for sleeping, shooting up drugs, and bothering visitors to the seat of municipal government.

Mayor Jane Williams-Warren ordered the benches be removed as a “safety precaution.” Some noticed the benches were gone on Monday.

“My decision was based on my concerns for the safety of the employees and the public that visit City Hall on a daily basis, where access is through the Market Street entrance,” said Williams-Warren on Tuesday afternoon.

There has been an increase in the number of people sleeping and using drugs at the benches, according to the city. Security staff at City Hall have attempted to shoo away the vagrants, but with limited success. The vagrant would simply return later.

Sometimes police and paramedics had to be called when a vagrant was stretched out on a bench and appeared overdosed or dead.

“People waiting for bus transportation were unable to use the benches,” said the mayor.

Her decision has been welcomed.

Council members had long complained the homeless population in front of City Hall presented a negative image of the Silk City.

Three beggars would approach a person walking into City Hall from the Washington Street side on any given day.

On Tuesday evening the entire front of City Hall was free of vagrants as a result of the mayor’s move.

The city has had similar success at the historic Danforth Memorial Library. Drug addicts would lean and sit on the retaining wall of the library. A new fence with spikes has worked wonders in removing them from the vicinity of the library.