Sayegh gets endorsement from Cotton; opponents criticize him for lobbyist’s support | Paterson Times 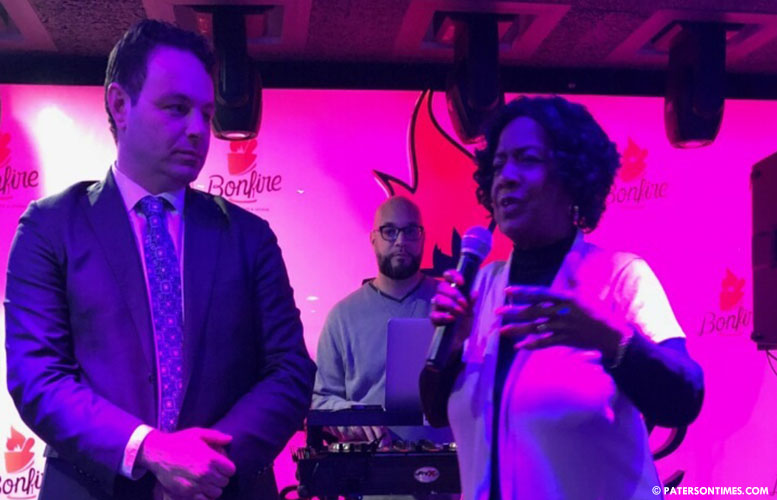 Councilman Andre Sayegh received the backing of council president Ruby Cotton and lobbyist Bill Pascrell III on Monday night. He was roundly criticized by opponents for accepting the endorsement of the well-known New Jersey lobbyist.

Cotton returned the support Sayegh showed her when she was fighting to hold onto her seat as acting mayor in the aftermath of mayor Jose “Joey” Torres’ conviction. She automatically became mayor when Torres vacated office. Her colleagues, in a 5-4 vote, booted her in favor of former city clerk Jane Williams-Warren.

“It’s not about color. It’s about who can lead us,” said Cotton on Monday night at the Bonfire Restaurant. “I know he’ll be the one that will be able to talk to people.” She said Sayegh has the relationships to bring resources into the once mighty industrial town for its revival.

Sayegh will be able to pull the city “out of the fire,” said Cotton.

Cotton’s endorsement was expected. Her husband, former councilman Ed Cotton, had endorsed Sayegh in Dec. 2017. “She handled the situation that happened with her when she was acting mayor a whole lot better than me,” said the former councilman on Monday night. “It was hard for me to accept it.”

Former school board member Pedro Rodriguez also backed Cotton as she struggled to hold on as mayor.

“She told me she wasn’t getting involved. It’s really disappointing she wouldn’t keep her word for someone that’s not going to win,” said Rodriguez on Tuesday morning.

Cotton did not return a call for comment on Tuesday morning.

“He pretended to be a supporter of Ruby Cotton when he was setting her up for this eventuality,” said councilman William McKoy. “It’s disappointing to see people fall for personal relationships over the interest of the city as a whole.”

Sayegh also got the backing of Pascrell. He is the son of congressman Bill Pascrell.

“Everybody running for mayor this year, each of them, are good people,” said Pascrell III. “This race is about getting things done.” He sees Sayegh as someone who can get things done.

Some of his opponents cited Pascrell’s endorsement to argue Sayegh is in the pocket of special interest.

“He responds to special interest. What you think lobbyists do?” said Rodriguez.

Some have suggested Pascrell’s endorsement means the Passaic County Democratic Party is behind Sayegh in the six-person race.

“We already know I wasn’t going to get the endorsement of the party. It’s what was expected. People are looking to gain something from the city,” said councilman Michael Jackson. “Citizens of Paterson are not stupid. A lot of people are watching what’s going on.”

Sayegh said Pascrell did not endorse him as a lobbyist, but on behalf of his family. He once worked for the congressman.

“He helped hundreds of my constituents with flood insurance relief. It saved thousands of dollars. That’s a relationship I’m proud of and it’s a partnership that has produced positive results for Patersonians,” said Sayegh of the congressman. “I gladly accept his family’s support.”

Congressman Pascrell still lives in Paterson. So, does some of his family.

Sayegh does not believe the endorsements will produce a backlash. Four years ago, Sayegh was endorsed on the steps of City Hall by major party figures. Voters saw it as a threat to the city’s nonpartisan elections and opposed Sayegh.

“He does not learn from his mistakes,” said Rodriguez. “He’s following the same exact path.”

“If the shoe was on the foot of those other two individuals they would have accepted those endorsements,” said Sayegh speaking of McKoy and Rodriguez.