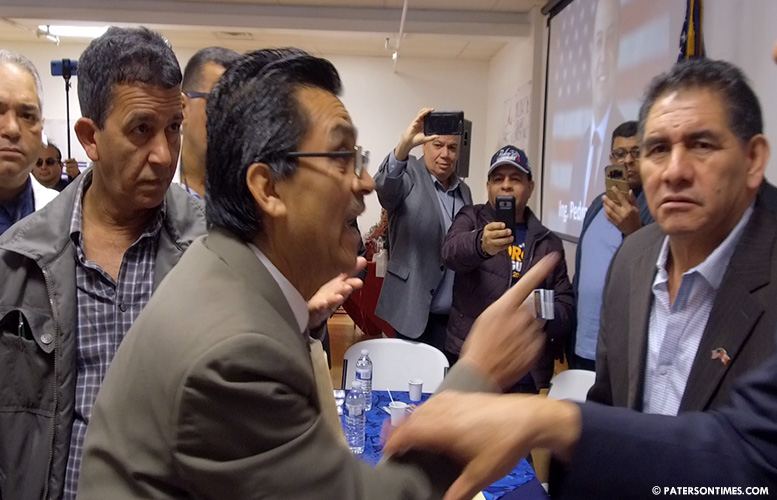 A man complaining about a broken municipal camera at an intersection, where his wife was involved in a motor vehicle accident last summer, almost caused a brawl at an election forum on Sunday.

Felipe Vera wanted to confront mayoral candidate Pedro Rodriguez about the broken camera at the intersection of Wayne and Totowa Avenues. He held Rodriguez, who works as a telecommunications systems analyst at the Paterson Police Department and tasked with maintaining the cameras, responsible for the inoperable traffic camera.

Vera become upset when his question was not answered at the forum. Rodriguez on Monday morning said Vera was planted at the forum by his opponent councilman Alex Mendez’s campaign to cause a scene.

Rodriguez identified the man as Vera. “He’s blaming me because it’s a political move. He and his wife work for the Mendez campaign,” he said.

Mendez rejected Rodriguez’s assertion the couple was put up to it by his campaign.

“I was not there when the incident happened,” said Mendez, who was scheduled to appear at the forum later in the day. “I got nothing to do with this. I’m focused on my campaign. He’s not my competition in this race.”

Mendez said Rodriguez has done a “poor job” in maintaining the city’s camera system. “He brags about being the person in charge of the cameras,” said Mendez. “He’s not even doing his job.”

Mendez repeatedly pointed out Rodriguez makes $73,000 to handle the cameras. Rodriguez’s responsibilities include other things like maintaining the network and telecommunication infrastructure.

Rodriguez said only 10-percent of cameras were working when he was hired in 2015. Now, 60-percent of them are working.

“40% of the cameras are down. I don’t see that as a big accomplishment,” said Mendez when told of Rodriguez’s assertion that when he took the job 90% were down now only 40% are offline.

“The city hasn’t invested money to repair the cameras,” said Rodriguez. Indeed, former mayor Jose “Joey” Torres’ administration went out to bid to replace and upgrade obsolete cameras, but the price tag was too high.

Last October, the administration presented a resolution to the council to reject a $1.5 million bid that came in to replace 38 broken cameras and upgrade 60 other ones. Council members voted to reject the bid at the recommendation of the administration which left many cameras inoperable.

Rodriguez said he has had to play MacGyver taking parts from broken cameras to salvage other ones.

The four councilmen – Mendez, Andre Sayegh, Michael Jackson, and William McKoy – running for mayor are familiar with the complex camera situation. However, Mendez and Sayegh, have, in Rodriguez’s view, unfairly used the offline cameras to levy attacks against him.

Sayegh talked about the offline cameras at the forum on Sunday without mentioning Rodriguez by name.

When asked if he blamed Rodriguez for all the municipal cameras that are not functioning, Mendez responded, “Of course.” He said Rodriguez presented an irresponsible proposal to the council to repair the cameras.

Mendez sympathized with the couple. He said the woman, Emery Vera, lost her car and has racked up medical bills.

The couple are open Mendez supporters.

“She owes a lot of medical bills,” said Mendez. He said she is having a tough time getting insurance to pay for her medical expenses without proof of the hit-and-run accident.

“I have done everything in my power to reconfigure cameras,” said Rodriguez.

Rodriguez said he played an instrumental role in getting 15 surveillance cameras in the Northside section through a grant he helped to secure for Paterson Habitat for Humanity. “They are state of the art. They are the latest of the greatest,” he said.

“Unless the city puts in money to repair cameras, the cameras cannot be repaired,” said Rodriguez.

Vera (pictured, pointing finger) was escorted out of the forum for causing a disturbance by the organizers.