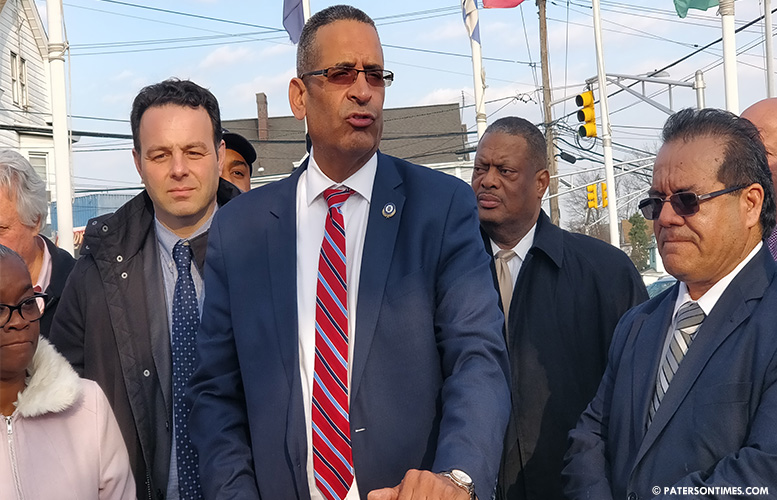 Councilman Luis Velez endorsed his colleague Andre Sayegh for mayor at a press conference at the Pan-American Park, a pocket park decorated with the flags of the nations of the Americas, late Wednesday afternoon.

Velez pointed up at the windblown flags of many nations to assert Sayegh will bring together the city’s different ethnic groups to build “One Paterson.”

“We’re in a situation where we cannot play with the future,” said Velez. “Paterson has to be in the right hands.” Sayegh will pull Paterson “out of the dirt,” he said.

“This is a big deal for me, thank you councilman Velez. Thank you for believing in my vision for a united Paterson, OnePaterson,” said Sayegh.

“It was a little bit of a battle,” said Velez, who said he listened and read everything available on the different candidates before making his pick. “I took my time.” Some insiders have said Velez was swayed by a $900-month house he received from Sayegh ally developer Charles Florio.

Sayegh also received the endorsement of former school board member Chrystal Cleaves. She told Sayegh her entire family will be coming out to the polls for him.

“We know you are up for the task,” Cleaves told Sayegh.

Velez also endorsed former councilman Aslon Goow. “Luis has that hands-on approach that I had. He sees this is what works,” he said.

Goow was a master of the hands-on approach in the 2nd Ward. He often cleared gangs from corners and confiscated guns. He lost his seat in 2012 to a mix of demographic changes in the 2nd Ward and the questionable use of mail-in ballots.

Velez described Goow as a “friend.” He is also backing Lilisa Mimms for a council seat, he said. He has yet to pick a third candidate for council.

The endorsement from Velez may be a big deal for Sayegh, but some political strategists raise doubt its value. Velez got on the council less than two years ago. But, Velez isn’t alone, other council members have joined in to sway the election. Councilman Shahin Khalique put his support behind Alex Mendez.

The most coveted endorsement from a council member was secured by McKoy. Outgoing councilman Kenneth Morris endorsed McKoy for mayor.

Velez represents the 5th Ward which has a large Dominican population. Velez is Puerto Ricans, but has the trust of the Dominicans in his ward. Mendez and Rodriguez are Dominican. Sayegh is seeking to get his share of Dominican votes in his election strategy to get a slice of every ethnic community.

Velez could help secure a sizeable Dominican vote for Sayegh, if he hits the streets and campaigns hard for his candidate.