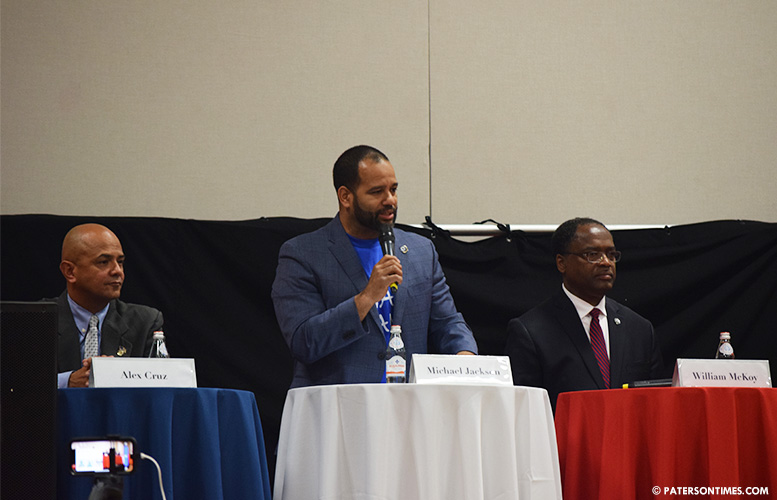 Five of the six men running for the city’s highest office debated ways to rein in taxes increases, get a hold on crime, and improve upkeep of municipal parks on Sunday evening. Moderated by news anchors Brenda Blackman and Greg Kelly, the debate kicked off with a question on tax increases over the years that led to numerous foreclosures in the Eastside section of Paterson.

Candidates councilman Andre Sayegh and detective Alex Cruz said the way out of annual tax increase is through economic development.

Cruz said economic development is key, but it won’t happen without a safer city. He said the city needs to stop taking on new debt. He talked about waste and inefficiencies without providing any examples.

Cruz suggested the increase in transitional aid over the past years from $23, $25, and then $27 million shows the government has failed to take serious steps to stabilize taxes. “Are we progressing? No, obviously, we’re going backwards,” said Cruz.

Councilman Jackson, who owns Jacksonville Restaurant on Marshall Street, defended his recent vote on the council to hike taxes 2.6-percent. He said the council had to approve the increase in order to receive the entire $27 million in state aid.

“Constituents did not see a tax increase,” said Jackson. Municipal officials, at the time of the budget vote, said the tax bills for homeowners has decreased due to the way the Passaic County government calculates taxes.

Councilman William McKoy, who is an auditor by profession, said, “You either have to reduce your expenses or increase your revenue.” He proposed the expansion of the public works department into garbage collection. Shared services agreements to collect the garbage of neighboring towns would create local jobs and bring in revenue to keep taxes down, he said. 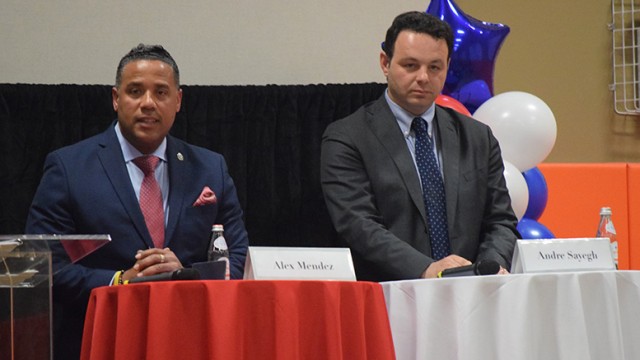 McKoy said he would also “manage the budget differently.” He has come under attack for voting in favor of every budget for the past 18 years. 15 of those budgets had tax increases.

Councilman Alex Mendez voted for one budget that had a tax hike. Jackson and Sayegh each voted for two budgets with tax hikes.

“What we have to stop is the corruption in Paterson, that’s the real reason you’re getting these tax increases every single year,” said Mendez.

The question also asked candidates for immediate tax relief. Cruz, who is the president of the police officers’ union, candidly remarked, “They’re not going to lower the taxes right now.”

“We don’t see enough police officers around our community,” said Mendez. He sees foot patrols as a way to increase visibility.

Mendez wants body cameras on every officer. He also wants a civilian review board for accountability.

Former mayor Jose “Joey” Torres was in process of setting up a civilian review board. A New Jersey judge last month issued a ruling that took away Newark Civilian Review Board’s subpoena and investigative powers.

Cruz wants substations in high crime areas. A substation is not needed in the 6th Ward, he said. He wants a police Mountain Bike Squad. “We don’t need officers walking,” he said.

Jackson said recreation is key to reducing crime. He said recreation and arts will “deter interest in crime.” He criticized the hotspot business curfew ordinance, which a police survey has found, has shifted crime from hotspots to cooler areas.

“So, what did it do?” asked Jackson mentioning the quieter parts of Paterson. “Now crime comes to your door step.”

Jackson also proposed a way to force officers to live in Paterson. Give a $14,000 salary and a residency stipend of $12,000. A new recruit makes $34,000 in Paterson. His goal is to discourage outsiders through a low wage.

“We need to make sure we don’t continue to bleed out,” said Jackson.

McKoy said unemployment is one drivers of crime. His plan to create jobs by expanding public works will provide employment to residents, who may otherwise have to resort to dealing drugs.

“We need to give them hope through employment, training, and development,” said McKoy of young men dealing drugs.”

“Let me give you a real answer,” began Mendez after Sayegh’s response. “It’s sad you can’t bring your kids to Eastside Park.” He said the parks have become haven for illegal activity.

Mendez wants a team to handle upkeep of parks. Currently, public works has a division tasked with the upkeep of local parks.

“We have to have accountability. Our DPW is in charge of the parks,” said Cruz. He said public works is failing to maintain municipal parks.

Jackson criticized Cruz for slamming public works. “Everyone wants to hold DPW so accountable. The least paid employees, least respected in the community – everyone wants to crack the hammer over their heads.”

Cruz is not wrong. Public works is badly run. Three public works supervisors were convicted for stealing from taxpayers along with disgraced mayor Jose “Joey” Torres. Some of the fraudulent timesheets were signed by its current director Manuel Ojeda.

McKoy said the city has failed to invest in public works. He said some public works vehicles were in the shop this week, but, the business administrator did not sign the checks to pay for the repairs.

The 1 hour 30-minute forum hosted by the Eastside Neighborhood Association attracted 200 people at the community center inside the Heritage at Alexander Hamilton, site of the infamous former Alabama Housing Projects.

Former school board member Pedro Rodriguez did not appear at the forum. He hosted some rappers, among them Fetty Wap, in his campaign office for an endorsement event while the debate was taking place.