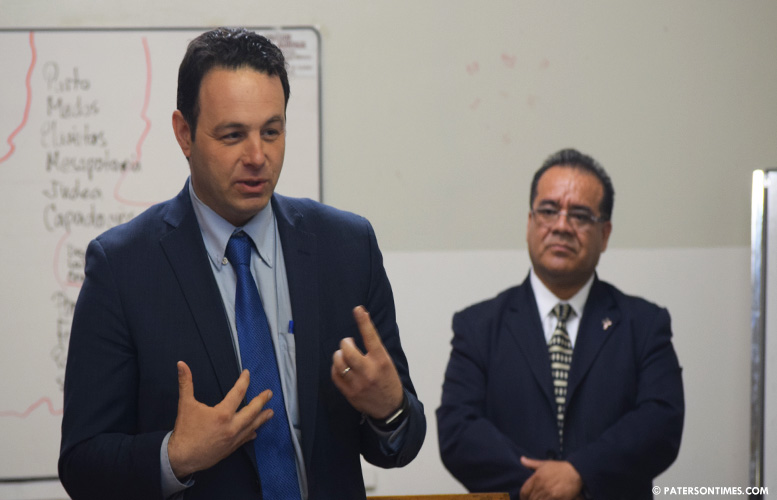 “We’re here because we’re concerned about our city,” said Sevilla (pictured, behind Sayegh), president of the United Leaders of Passaic County, a group made up of a dozen Hispanic and African-American church leaders. “Paterson has very good ingredients but needs a new chef.”

Sayegh thanked the 12 pastors for their endorsement. He promised walking police presence to improve public safety in the city. He also backs a light rail service proposal for the city.

Even before the end of the endorsement event at the Iglesia de Dios on Summer Street, Sevilla’s neighbors criticized Sayegh for accepting the endorsement.

“Sayegh and Velez have been enabling this person and his shenanigans and disrespect of code enforcement. Therefore, this endorsement is not a shock,” said Karen Agosto, a resident of Atlantic Street, who has opposed the garage Sevilla turned into a food pantry and church without going through the zoning approval process. “What’s disturbing is that Andre sales himself as the candidate concern with ‘quality of life issues,’ but through his actions he has shown disregard for me and my neighbors.”

25 residents of Atlantic Street have signed a petition opposing the church. Their opposition forced Sevilla to withdraw his application to legitimize the church through zoning board approval.

Sevilla’s church is on a residential street.

Sayegh said Agosto has never approached him to assist in resolving the problem on Atlantic Street.

“It’s not even in my ward,” said Sayegh. Sevilla’s church is in the 2nd Ward.

Agosto said neighbors spoke to Sayegh about the problem, but he still held community meetings at Sevilla’s church which has been cited by the municipal government.

When asked, how he plans to address the situation on Atlantic Street, Sayegh replied, “We’ll bring all parties to the same room.”

“We’re here to resolve the problem not to bury the man,” said councilman Luis Velez of the 5th Ward referring to Sevilla.

Some of the residents of Atlantic Street have said Velez and Sayegh have been protecting the pastor.

Sevilla has received violation notices from the city. A fire department order declaring his garage an imminent hazard forced  him to move Sunday service to nearby School 8. Some have suggested Sevilla is waiting for a change in administration to get his way.

Sevilla has expressed a willingness to relocate his church. However, he has to find a building in a non-residential area.

“There is still hope for our city,” said Donna Warren, pastor of the New Christian Tabernacle Church on Madison Avenue.