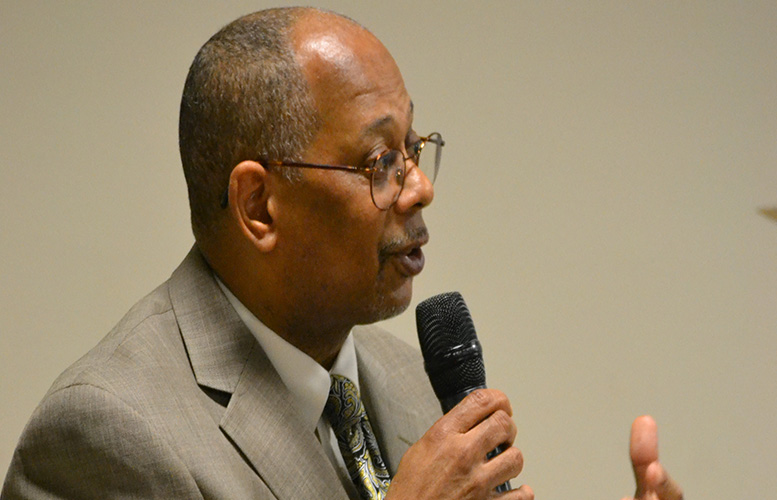 Douglas Maven, who has been the pastor of the First A.M.E. Zion Church on Ellison Street for 27 years, sees the problems – drugs, prostitution, and violence — that ail Silk City from his church door steps.

Maven, 60, is also witness to the effects of annual tax increases on the families of one of New Jersey’s poorest cities.

“I see the impact. I’ve seen an exodus from my congregation,” said Maven. He said the city needs to set priorities to keep spending under control to avoid raising taxes on homeowners.

Maven joked when his congregation shrinks so does his income. He recognizes the city needs economic development to increase revenue.

Maven favors investing in the Great Falls and Hinchliffe Stadium. “I will be in favor of using any resources we have to make it a tourist attraction to attract foot traffic to Paterson,” said Maven. “We’re investing in ourselves.”

Some see the Great Falls as a regional tourist hub that will generate jobs for the city.

If elected councilman, Maven said he will scrutinize tax abatement deals. He said low-income housing projects often have state and federal incentives to build. “Don’t give it away,” he said. “I think it has to be done case-by-case.”

Maven agrees with the rejection of the 30-year payment in lieu of taxes (PILOT) agreement for Cooke Hamilton Associates. The developer for the project had secured other incentives to build, but still wanted a tax abatement deal.

“In that case, I’d have said, ‘No tax abatement for you,’” said Maven.

Maven does not have a clear position on the hotspot business curfew ordinance which forces businesses in high crime areas to close at midnight, that, according to police data, reduced non-fatal shootings by 79-percent in designated zones the first year it was in effect.

“If you concentrate in one area it shifts to a different area,” said Maven. “Crime is moving from those hotspots to the surrounding areas.”

Maven said he does not oppose the hotspot ordinance. However, he would like police to do more to ensure crime does not spread to nearby areas.

Maven has a strong position on ensuring department heads reside in Paterson. He cites an example from his own career as a pastor. When he came to Paterson, the parsonage, living quarter for the pastor, was at his church on the corner of Ellison and Summer Streets. A rough part of Paterson.

“Nobody wanted to live there on Ellison Street,” said Maven. He came to the church with a newborn baby, he said.

“That told people I was committed to being here,” said Maven. He said he will vote down the appointment of any director who does not live in Paterson. He noted if a director lives outside of Paterson, he ought to invest in the city and relocate to take the job.

Besides being a pastor, Maven serves on a number of boards. He is the founder and chairman of the New Destiny Family Success Center. He serves on the Passaic County Board of Social Services, the Paterson Housing Authority, New Jersey Together, and the Hood Theological Seminary in Salisbury, North Carolina.

Maven has a bachelor’s in industrial management from Cheyney State University in Cheyney, Penn. He has a master of divinity from Hood Theological Seminary. And a doctorate in ministry from Hartford Seminary in Hartford, Conn.

Maven said he hopes to bring unity and accountability.

“I know accountability. I’m a Methodist,” said Maven. He is one of 14 people running for three available at-large council seats.

“I want us to come together with a common vision and plan on the council,” said Maven, who is willing to work with whomever becomes mayor. “Nine people with nine different plans. We’ve been trying that for years. It hasn’t worked.”