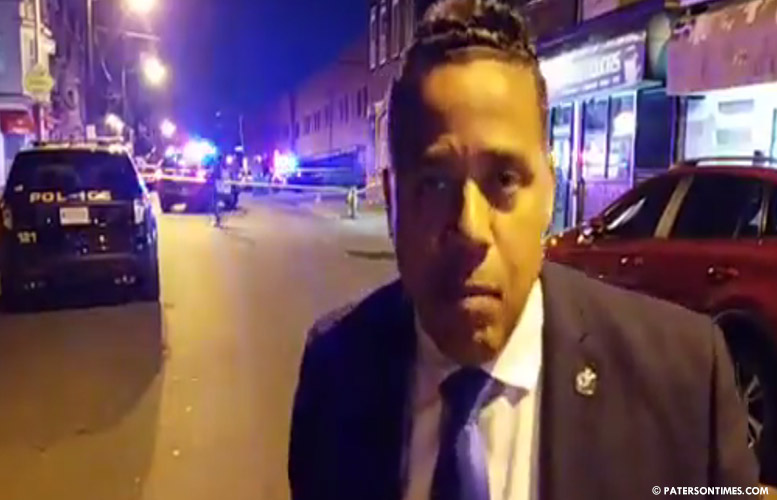 Councilman Alex Mendez, who hours earlier received criticism for being “soft on public safety and crime,” tried to bolster his public safety credential by filming on Market Street minutes after a “drive-by” shooting on Monday night.

“Public safety is one of my number one priority just to make sure people feel safe in the City of Paterson,” says Mendez in the five-minute video shared with his supporters on social media. “Crime does not happen by midnight, 1 o’clock, and 2 o’clock in the morning. Crime is happening in Paterson at any time during the day. It’s 8 o’clock and we have a shooting.”

Mendez points out the shooting happened steps away from his campaign office. He also points out there are children on the sidewalks. He is approached by a woman.

“How you doing neighbor? How are you?” Mendez greets her, shaking her hand.

“I’m good,” replies the woman. “This is unacceptable right here. When is this going to stop?”

Mendez tells her he has the answers to solve the city’s crime problem. No solutions are shared in the video. “We’re going to make it happen,” he tells her. “It’s unacceptable what you see right now.”

“Yea, I’ve seen you,” she replies without enthusiasm before adding, “I see Luis [Velez] all the time too.”

Velez and Mendez are enemies on the council. He disagrees with Mendez and opposes his run for mayor.

“That’s mistake number one, doing live reporting and asking people,” said Velez on Tuesday morning. “I think she was confused with him,” said Velez. He said it seemed like Mendez was trying to push her to say she sees him on the street.

Velez said he was at the scene soon after shots were fired in the area. A 25-year-old man was wounded at about 7:08 p.m., according to police.

Velez said at least his constituents can say he is visible. Velez has been on the council for less than two years.

Mendez has been on the council for almost four years. If he loses the May election, Mendez will find himself without a seat. He is one of six men running for mayor. The others are William McKoy, Michael Jackson, Alex Cruz, and Pedro Rodriguez.

Mendez did not respond to a call for comment for this report.

Velez, who represents the 5th Ward, where the shooting happened, said he requested a police mobile camera unit for the intersection.