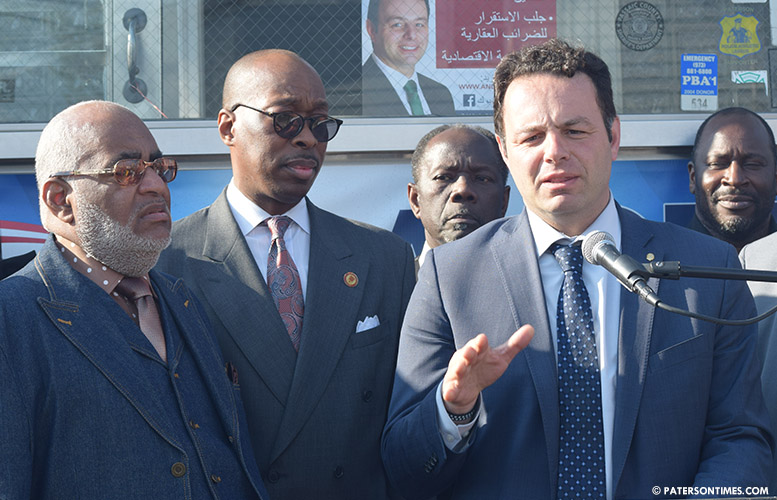 Sayegh received the support of 18 pastors at a brief event outside the former Eggplatter Diner on Crooks Avenue on Saturday afternoon.

“Our city needs a mayor who has the unwavering commitment to lead Paterson forward,” said pastor Kenneth Clayton of the St. Luke Baptist Church. He said while Jersey City and Newark are attracting new businesses and creating opportunities for their residents, Paterson continues to lag behind.

Clayton cited Sayegh’s work in the 6th Ward. He said the councilman has championed successful efforts to make his area safer and economically robust.

“This race is not about race. This race is about results,” said Sayegh, who has collected a segment of support in just about every ethnic community in the city. “We’re proud of the work we have done in the 6th Ward.”

Sayegh is hoping the endorsements of the 18 pastors turns into support at the polling places on May 8.

“He’s come to us, come among us. He showed us he wants to befriend us. And has a genuine concern for our needs. Some of the candidates haven’t taken the time to do that,” said pastor Norman Harris of the Greater Bethel Church of Christ.

Some of the pastors said Sayegh is extremely responsive to their concerns.

Six men are running for mayor. Two of those candidates are black – Michael Jackson and William McKoy. Other candidates are Alex Cruz, Alex Mendez, and Pedro Rodriguez.

Clayton rebuked McKoy earlier in the month for making a controversial statement about civil rights leader Martin Luther King, Jr. At the time, McKoy’s supporters said the comment was blown out of proportion by Sayegh supporters.

“Two separate events,” said Clayton. He said his support today had nothing to do with his condemnation earlier in the month.

“Everybody could support and endorse whomever they want,” said McKoy. “We don’t believe this race is going to be about endorsements or it’s going to be about money. We know the party has influence and the party influences a lot of people in what they do. Their candidate is an empty sack. He has no experience and no skillset for the job.”

Sayegh at public forums said he will hire a skilled business administration. At those forums, he said he will be a cheerleader for the city. McKoy has criticized him stating he is trying to outsource the responsibility of the mayor.

“That’s not a mayor for the city of Paterson,” said McKoy on Saturday afternoon.

McKoy said people respect their pastors, but on election day each voter will walk into the booth and make their own decisions.

“If this was some other situation, I think it would be significant,” said McKoy. “The evangelical community gave us Trump and we’re seeing Trump II.”

Sayegh supporters see the endorsement as significant. Some see it as the African-American community rallying behind their candidate.

“Our home is in need of improvement. We’re here to breathe new life into a city that has been gasping for air for far too long,” said Sayegh.