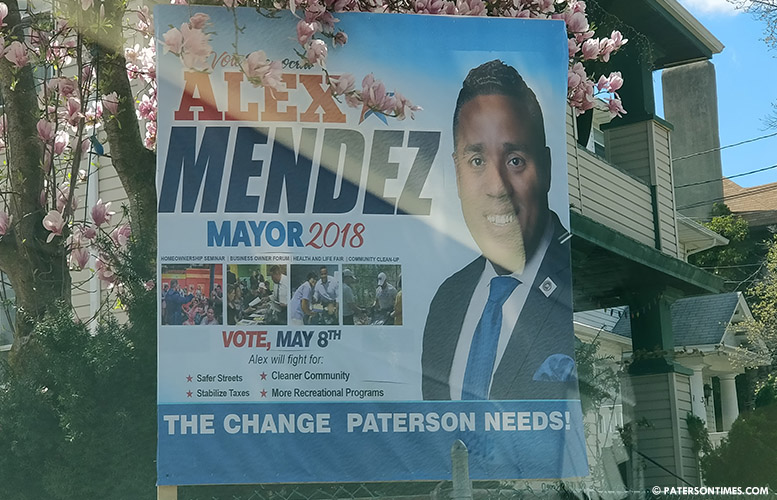 Councilman Alex Mendez, who has been attacked for failing to file timely campaign finance reports and failing have ‘paid for by’ texts on his campaign materials, appears to be taking steps to address the latter problem.

Mendez campaign’s failure to have the legally required “paid for by” on materials led to criticism from his opponents earlier in the week. He was accused of using “dark” and “dirty” money to finance his campaign.

On Thursday, dozens of Mendez campaign signs observed in different parts of Paterson appeared to carry the “paid for by Alex Mendez for mayor.” However, there were dozens that still lacked the text.

Mendez’s campaign has said his team is working on correcting the sign problem. He did not respond to a call for comment for this story.

Some have complained about the signs of other candidates. For example, former school board member Pedro Rodriguez and councilman William McKoy’s signs from distance appear not to carry the “paid for by” text. However, upon close inspection, both Rodriguez and McKoy’s signs have small text lines that state the signs were funded by each candidate’s campaign.

Candidate Pedro Rodriguez’s campaign sign with difficult to see “paid for by” text on the lower right hand corner.

“I’d be surprised if there’s a sign that doesn’t have a ‘paid for by’ sign,” said Rodriguez speaking of his signs. He was sent a picture, which was provided by a resident, that purports to show missing “paid for by” text.

Rodriguez zoomed into the picture and showed that his signs carry the paid for by labels.

“Mendez has no standards,” said Rodriguez of the missing paid for by line on Mendez signs. “He should be reporting all the money that’s coming in.”

Mendez is three weeks late in filing his 29-day pre-election report. All five of his opponents have submitted their legally required finance reports for voters to see the source of their campaign funds.

“Think about it. It only worsens a situation that was bad to begin with. He’s not telling us where his money is coming from and then he is not telling us how he’s paying for his campaign materials,” said councilman Andre Sayegh.

Mendez has been habitually delinquent in filing his campaign finance reports. His failure in transparency has led to not only attacks from his opponents, but from a super PAC that his campaign has said is tied to Sayegh.

“What is Alex Mendez hiding?” asks a mailer sent by the Progressive Values Committee of Bayonne.

Mendez took offense to a picture the super PAC used on the mailer. His opponents say he is offending voters by failing to file timely report and not including “paid for by” labels on his campaign signs.

“Where’s the money coming from? Where’s the money being spent? These are the questions of the hour,” said Rodriguez. “Voters have the right to know who is funding whose campaign. That’s a basic right.”