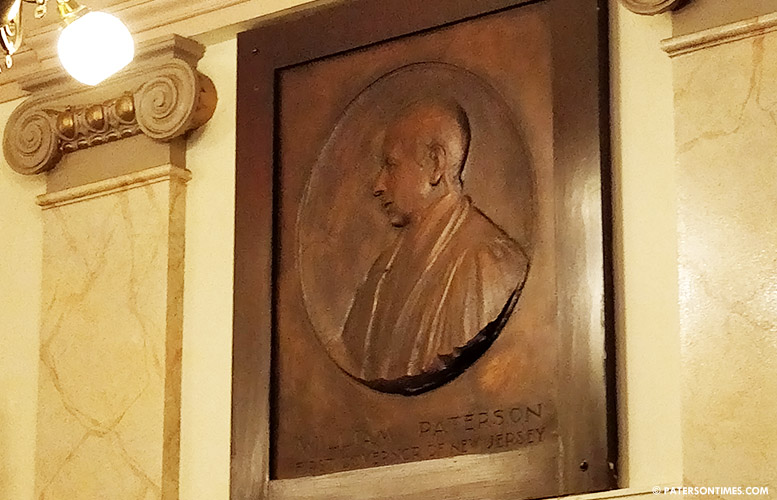 The relief profile plaque of William of Paterson that hangs on the wall outside of the mayor’s office on the second floor of the historic City Hall building carries a historical error. The plaque incorrectly states William Paterson was the “First Governor of New Jersey.”

Elisha Lawrence served as acting governor after Livingston. He is not generally listed as the second governor of New Jersey. He served from Jul. 25, 1790 to Oct. 29, 1790. He was succeeded by William Paterson, who served from Oct. 29, 1790 to Mar. 30, 1793, before resigning to accept an appointment as associate justice of the U.S. Supreme Court.

DeStefano contacted the historian after seeing a news story.

Smyk said there’s a simple solution to correct the error. “There should be another plaque installed underneath indicating that William Paterson was New Jersey’s second governor not first, that’s all,” he said.

“I haven’t noticed it,” said council president Ruby Cotton when told of the inaccurate caption on the plaque. A reporter noticed the error on Monday. “They need to take that down and fix it.” She said she planned to take a close look at the plaque to observe the error.

“I went out there and looked at it,” said mayor Jane Williams-Warren. She said she had worked at City Hall for 48 years, but never closely looked at the plaque. “I’m not going to change the plaque. I think it’s historic.”

Williams-Warren said she will leave it to her successor to add a second plaque to correct the error.

The plaque is one of two created to adorn the exterior wall of the mayor’s office by famed sculptor Gaetano Federici. He produced two identical 36” x 44” x 1” relief profiles of Paterson and Alexander Hamilton.

“Both were designed to flank the entrance to the mayor’s office on the second floor of city hall. The sculptures are made of plaster and are signed ‘G. Federici.’ They were installed in 1936,” said Smyk.

During the 1930s, when the Great Depression was in full swing, Federici had to rely on minor commissions to earn a living. He took on a number of commissions from the municipality, said the historian.

“Federici was thus in error in stating that William Paterson was ‘First Governor of New Jersey,’” said Smyk.

The misleading plaque is visible to anyone passing through the second floor of the City Hall. It likely influenced former mayor Jose “Joey” Torres, for, while at a ribbon cutting ceremony for the New York Medical College residence hall in 2016, he stated Paterson was the first governor of New Jersey.

Torres, a three-term mayor, was subtly corrected by another speaker.

Hamilton named the City of Paterson after Paterson.

Paterson, a signer of the U.S. Constitution, was one of the first two U.S. senators from New Jersey. He was also the proposer of the New Jersey Plan to ensure small states had fair representation in the U.S. Congress.