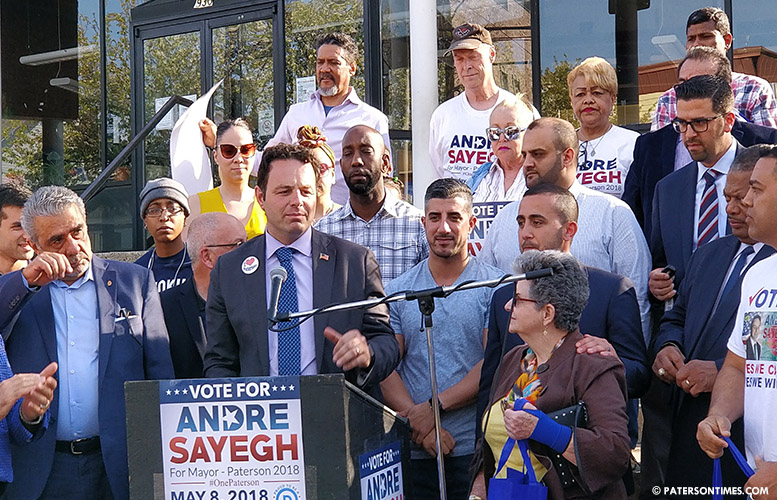 Councilman Andre Sayegh’s announcement of a police substation coming to the South Paterson library in mid-June irked some of his colleagues on the City Council on Tuesday night.

Some called for an immediate explanation from police chief Troy Oswald. Councilman Michael Jackson and William McKoy demanded the chief appear before the council hours after Sayegh’s announcement to explain the substation.

For an hour or so it appeared as if the chief was on his way to the council.

“The chief is in route?” asked Jackson.

“No,” said business administrator Nellie Pou. “He’s not in the Paterson area right now.” She also noted the administration had nothing to do with Sayegh’s press conference.

Pou said she spoke to the chief about the “serious matter” that some of the council members raised.

The business administrator noted no one from the police department was involved in Sayegh’s press conference. Indeed, there were no police personnel at the press conference which happened two hours prior to the council’s meeting.

McKoy said whomever is running the police department right now should appear before the council with an explanation.

Kenneth Morris, councilman at-large, asked whether the chief is aware of the substation.

“A mayoral candidate not even promise but affirmed there would be a police substation at South Paterson library,” said Morris. He said there was no conversation with the council to place a substation at the library.

“The candidate seems to have inside knowledge or is making totally false promises,” said Morris.

Sayegh said he had mentioned the substation two weeks ago at a council meeting. He said he had been lobbying for it since mayor Jose “Joey” Torres was in office.

Pou said mayor Jane Williams-Warren and others toured the library space to house the community police program at the library.

“At the tour was the mayor, myself, the police chief, person in charge of community policing, and DPW,” said Pou. The tour happened long before the press conference.

“If you were going to put a substation anywhere, based on data, based on need, which is what would be required, unless you are doing a political operation, then the data would say the 4th, the 5th, and the 1st [wards], or someplace other than the South Paterson library” said McKoy. “The fact of the matter is, the mayor or whomever showed up there, and declared that to be a need without any data, reeks of impropriety.”

“Who gave the authority to begin with?” asked Jackson.

The mayor was not present at the press conference.

“That’s why this police department is under duress in the courts and every place else because they appear to be out of control. They don’t know what the rules are,” said McKoy.

McKoy said there should be a public announcement that Sayegh had nothing to do with the substation.

McKoy, Jackson, and Sayegh are opponents in the six men mayoral race. Other candidates are Alex Mendez, Alex Cruz, and Pedro Rodriguez.

Election is on Tuesday of next week.

Sayegh said McKoy is “jealous” because he failed to get a substation in the 3rd Ward.

Jackson wanted a special meeting to discuss the matter. Council president Ruby Cotton said she could not schedule one before the election.