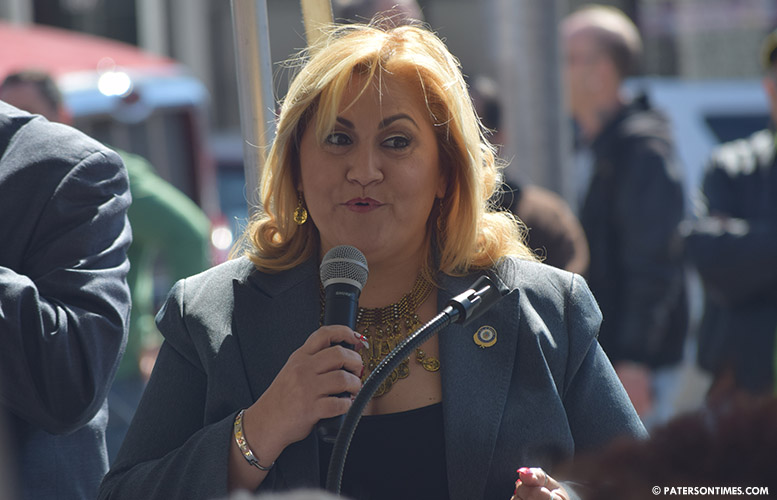 Councilwoman Maritza Davila vowed to continue making “tough decisions” on behalf of residents if re-elected on Election Day next week. Her recent tough decision was supporting a budget in late March that had a 2.6-percent tax increase.

Davila at first voted against the budget, but then changed her vote in favor. She was attacked by former three-term councilman Aslon Goow, who is running in the 14 person at-large race, from the audience for backing a tax increase.

“If this doesn’t pass what happens?” said Davila at a televised debate late last month referring to a possible government shutdown when a budget is not adopted. “What happens to those $27 million?”

Davila is referring to the $27 million in state aid the municipality received to balance its budget. Some viewed the budget as irresponsible. Administration officials were blamed for failing to make needed cuts to rein in tax increases.

Her tough decisions have cost homeowners. She voted in favor of all four budgets since taking office in Jul. 2014.

3 of the 4 budgets Davila voted in favor of raised taxes on property owners. She has been criticized for being too close to the administration of disgraced mayor Jose “Joey” Torres.

“People have tried to indicate I’m that individual who is just pro administration,” said Davila. She had tied her political fortune to the sinking Torres ship. When Torres gave a presentation on an economic development plan in February 2017, Davila called the plan, which had little that was new, “ambitious,” stating she planned to tout the administration’s achievements in her re-election bid.

Torres, who insisted he was not guilty of stealing from taxpayers at the time, had become toxic at that point. Davila never ceased to back the mayor. She was one of the votes to derail the no confidence measure championed by councilmen William McKoy and Andre Sayegh, two men who intensely dislike each other, but found themselves on the same side, to demand Torres resign from office.

Davila claimed taking a vote of no confidence against the indicted mayor would bring bad publicity to the city. She had doubts about the videos that aired on NBC New York showing the mayor directing public works employees – three supervisors were convicted – to renovate a warehouse leased by his daughter and nephew using taxpayer dollars.

Davila was the sole member of the council to go on a cruise to raise funds for the ex-mayor’s legal defense fund.

Seven months after Davila publicly tied her political fortune to that of a corrupt mayor, something happened. Torres, who for months claimed he was innocent, entered a guilty plea. He was later sentenced to five years in state prison.

Davila did not discuss her achievements in office at the televised debate. She did not respond to a call for comment for this report.

Davila supported a measure in 2015 to charge parade organizers for security and clean up costs for their events.

The measure was widely viewed as a positive. Parade organizers should pay for their security and clean up rather than burdening taxpayers, many argued.

Parade organizers were unhappy and took aim at Davila. Last year, she engaged in a shouting match with a protester, who was unhappy over the parade fee increases, inside City Hall. The fee ordinance combined with naming of a section of Market Street as Peru Square has led to big loss of support for her in the city’s Peruvian community.

Davila was accused of hijacking the Peru Square ceremony. She excluded the group that had fought hard to collect petitions to make the street naming possible.

Four years ago, Davila won with the support of the Peruvian and Bengali voters. She has lost significant amount of support in both communities. She had been allied to former councilman Mohammed Akhtaruzzaman, who hails from the Bangladeshi-American community, four years ago that helped her win the council seat.

Davila and Akhtaruzzaman fell out soon after the election.

Akhtaruzzaman is running in the 14-person race for a seat. He continues to remain popular in his community. Davila has formed an alliance with councilman Shahin Khalique, who has limited support in his community.

Davila formed an uneasy alliance with mayoral candidate Alex Mendez. She and Mendez have had public fights over appointments at City Hall in 2015. His candidacy has been rocked by scandals over his campaign and personal finances. Mendez has yet to file his campaign finance reports with the state.

Davila, who works as an admissions administrator at the Passaic County Community College, is the sole incumbent in the 14-person race which gives her a slight advantage over the other candidates. She also benefited when former school board candidate Nelly Celi did not have enough valid petitions to get on the ballot.

Celi is running a write-in campaign for one of the three council seats. She has the potential to take away a portion of the Peruvian vote.

Four years, ago Davila won by 5,761 votes. She barely beat then-incumbent Kenneth McDaniel, who received 5,522 ballots. McDaniel is running to reclaim his seat.

There are three available at-large council seats. Out of the 14 candidates, the top three vote-getters will win a seat on Election Day.

Davila is optimistic she will win one of the three seats.

“I am your councilwoman that will be coming back,” she said.