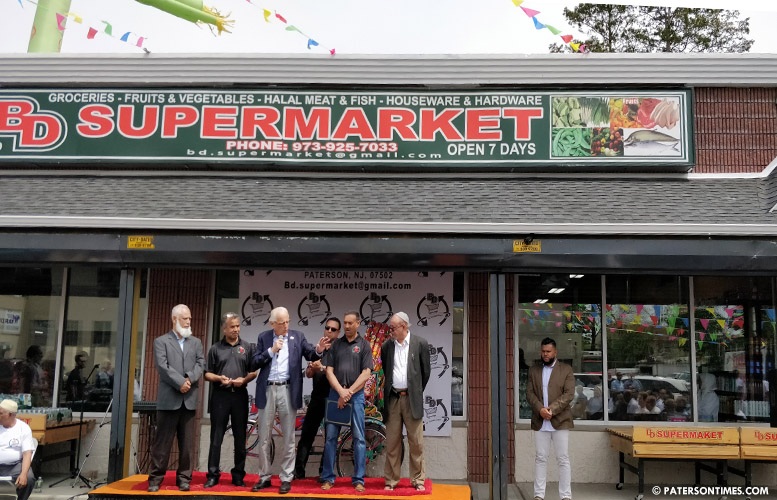 A large supermarket in the Hillcrest section opened with fanfare over the weekend. Over 6,000 square feet of fruits, vegetables, meats, and other items.

“We went through a very hard time to get this completed,” said Ali, who had to overcome some opposition at the Paterson Board of Adjustment to secure approvals. “Without my family, all of my family, we couldn’t have done this.”

The Ali family is among the earliest immigrants from Bangladesh to arrive in Paterson. The family made the Silk City home in 1972. The family wields enormous political clout in Paterson which was on display at their grand opening.

“I don’t go to many openings,” said Rep. Bill Pascrell. He said he attended the grand opening to show his support for the business and the Bangladeshi-American community that is concentrated in the Totowa, Hillcrest, and Stony Road neighborhoods.

Pascrell received hugs from dozens of men as he walked to the front of the business to speak. He stood in front of a heavily decorated rickshaw, a symbol of the old country, to provide a citation to the two brothers for opening the business.

“You know how I love you. We go back to 1990,” said Pascrell, recalling a political event the community held for him when he ran for mayor. “We had our first party on Jasper Street.”

The business will primarily serve residents of the 1st and 2nd Wards.

“”My wife and I are really happy,” said Alaur Khondokar, former Paterson Board of Adjustment member, noting the parking spaces in front of the business. “I live 2-3 blocks from here.”

Khondokar said he plans to shop at the new supermarket.

“I had a chance to tour it. It’s beautiful. It’s big. It has everything in there that you can look for,” said assemblyman Benjie Wimberly. “We wish you the best with your new business.”

“I’m thrilled the Ali family opened a grocery store here,” said Passaic County freeholder John Bartlett. His wife is of South Asian extraction. “I’m usually the guy that goes grocery shopping. I got to go to Parsippany, Jersey City, but not anymore. I can come right here.”

Shahin Khalique, 2nd Ward councilman, who hails from the Bangladeshi-American community, said he was “grateful” for the family’s investment in the neighborhood.

Ali has experience running a supermarket. He was one of the partners of a supermarket on Wayne Avenue called Noya Bazaar. There was a split in ownership that forced the brothers out of that partnership.

Ali credited his brother for having a big vision for the new supermarket.

“We’re proud of them,” said Pascrell of the two brothers.