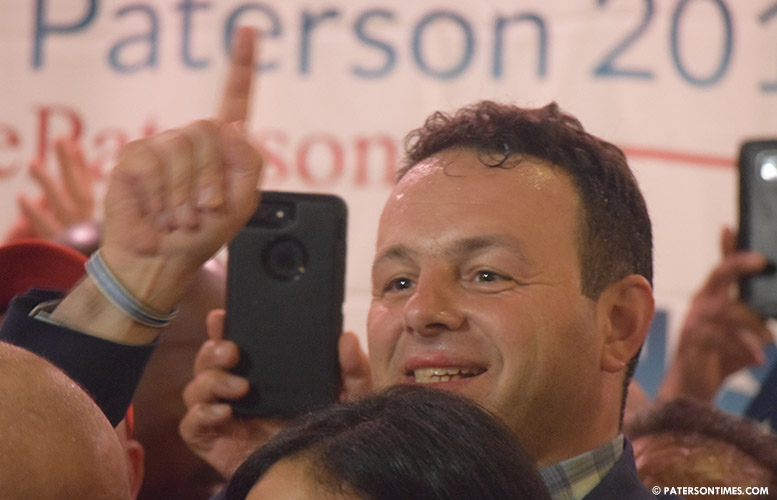 Councilman Andre Sayegh succeeded in marshalling the city’s disparate ethnic groups behind him to defeat five opponents in a landslide on Tuesday to win the mayor’s seat. His victory follows two previous failed bids for mayor in the past eight years.

Sayegh kept the lead in vote tallies as the ballots were counted edging runner-up Alex Mendez by 4,000 votes. He clinched the victory with 8,559 ballots, according to unofficial election results.

“This victory is not about one person. It’s about one Paterson,” said Sayegh in front of several hundred supporters at the Brownstone House on Tuesday night.

Sayegh is the son of Middle Eastern immigrants, Syrian mother and Lebanese father. He was raised by a single mother. His win makes him the first Arab-American to become Paterson’s mayor.

“What does that one Paterson mean? It means, whether you are Bengali, Peruvian, Palestinian, Jamaican, all everything, you are one Patersonian,” said Sayegh. “I may not look like you, but I will look out for you.”

Sayegh got his political start working for Rep. Bill Pascrell. Sayegh, 44, joined Pascrell’s New Jersey state assembly campaign in 1994. The next year, Pascrell won a seat. Sayegh served on the school board from 2004 to 2008. He won the 6th Ward council seat after the retirement of longtime councilman Thomas Rooney.

Early on in the night, some in the Sayegh campaign were prepared to throw in the towel as the mail-in ballot counts came in. Sayegh was third place behind Rodriguez and Mendez. Rodriguez had the most mail-in votes with 1,653 ballots. Mendez had 1,277. Sayegh was a distant third with 434 ballots. The other three candidates each had under 100 mail-in votes. But, things took a dramatically positive turn, when Sayegh began beating his opponents by triple digits in different districts.

Sayegh’s two previous losses were on his mind when he delivered his brief victory speech.

“People can call me a lot of things, but they can’t call me a quitter,” said Sayegh. “Four years ago, in my concession speech, I said, ‘We fought the good fight.’ We’re here four years later because we never stopped fighting.”

Sayegh received the tacit backing of the Passaic County Democratic Party. Key party officials were at his victory party. John Currie, chairman of the New Jersey Democratic State Committee, urged all six men in the race to work together.

“I’m excited for the people of Paterson,” said Currie. “He cares about everyone.”

Five of the six men raised $841,000 in the race, according to estimates and their pre-election campaign finance reports.

Sayegh raised $303,617 for the race, according to his pre-election reports.

Mendez did not file any campaign finance reports. Though he claimed his campaign is running on limited funds, his opponents have said he spent equal or much more than Sayegh.

“I think it’s a great win for the city. We did the right thing,” said civil rights leader Russell Graddy. His endorsement just days before the election solidified African-American support behind Sayegh.

Sayegh campaigned hard in the largely Dominican 5th Ward in the days before the election with councilman Luis Velez.

Velez’s support helped to convert Dominican votes for Sayegh. Both Mendez and Rodriguez hail from the Dominican community — at first it seemed as if Sayegh would fail to get votes from that community.

“We made history by uniting the community to make the right choice,” said Velez, who is Puerto Rican but is popular with Dominican voters. “What happened tonight was an expression of unity.”

Sayegh’s victory creates a vacancy in the 6th Ward. His seat has to be filled through a special election in November. His friend, Al Abdelaziz, who helped to get the Middle Eastern vote out, is expected to run to succeed him.

Abdelaziz on Tuesday night would not say whether he plans to run for the seat.