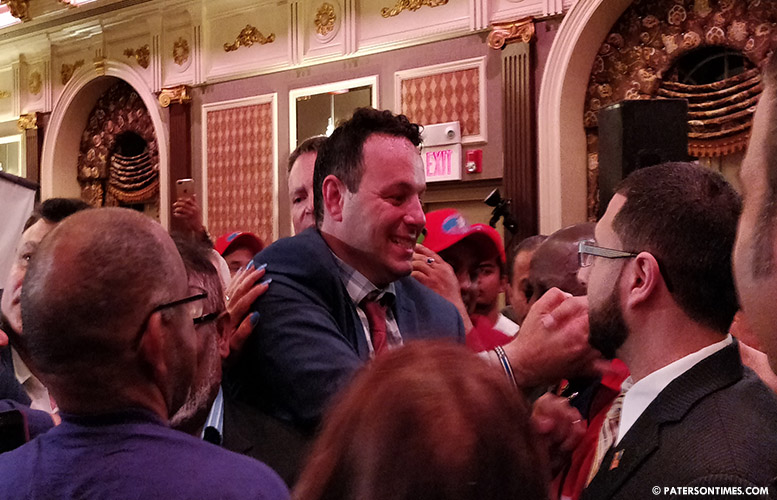 Councilman Andre Sayegh in a rare move by a mayor-elect has invited his eight City Council colleagues to serve on his transition team.

“I am looking forward to working collaboratively with each of you as Councilpersons, and I would greatly appreciate your input during the transition period,” wrote Sayegh in a letter dated May 22, 2018 to council members.

Some saw the letter as an effort by an incoming mayor to be inclusive.

“To me that’s like trying to pull everyone together. That’s the way we’re going to move forward,” said council president Ruby Cotton. She is interested in serving on one of the 11 committees formed as part of Sayegh’s transition.

Cotton backed Sayegh for mayor. Her husband is one of the co-chairs of Sayegh’s transition team.

Sayegh and the new and re-elected at-large council members – Maritza Davila, Lilisa Mimms, and Flavio Rivera — will be sworn in on Jul. 1.

Morris has decided to leave the council after 16 years.

Some council members have yet to see the three-paragraph letter, but reacted to it from an audible summary provided by the Paterson Times.

Others were not so thrilled by Sayegh’s invitation to serve on his transition team.

“I don’t think it’s the role of the council to be in that position,” said William McKoy, 3rd Ward councilman. He said there’s an “inherent conflict” in vetting candidates for municipal departments and then voting to confirm them.

Council members will have to approve eight of Sayegh’s department director appointments. Cotton said council members can decide not to take part in vetting candidates, but work on providing their input on the issues each committee is designed to tackle.

“You got to remember five council members can’t serve on the same team that would be a quorum,” noted Cotton.

Sayegh has 11 committees. In his letter, he asks council members to pick a committee to serve on. He has committees dealing with tourism, finance, economic development, public works, recreation, public safety, and other key areas.

He also suggested creating open lines of communications between the mayor-elect and the leader of his transition team.

“I’d love to have opportunity to provide input. That’s something the council is automatically endowed with,” said Michael Jackson, 1st Ward councilman. When asked if he plans to serve on the Sayegh transition team, he said, “Possibly not.”

Both Jackson and McKoy were among the six men to battle for the mayor’s office. McKoy and Jackson finished fourth and fifth in the race.

Council members Maritza Davila, Shahin Khalique, and Alex Mendez did not respond to calls for comments. Mendez was among the six; he had to give up defending his at-large seat to run for mayor. He finished second place. Due to his loss, Mendez will be leaving the council on Jul. 1.

Sayegh announced his 36-person transition team on Monday afternoon. He has described his transition team as one that represents the diverse ethnic communities of the Silk City.