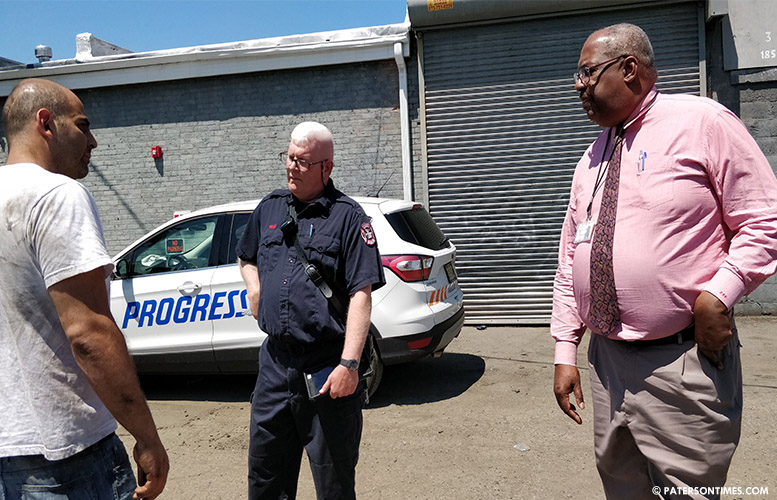 For the second time in matter of weeks, municipal inspectors had to close down an unsafe building that houses a number of businesses on Warren Street.

Community Improvement and fire inspectors descended on 185 Warren Street on Thursday afternoon to shut the building down, again, after citing it an imminent hazard late last month.

Inspectors ordered people out of the half-dozen businesses housed in the crumbling building. Inside there was exposed wiring and collapsed wall that was badly repaired. Part of the building had an auto-body shop where painting was being done without vents.

Power was cut by PSEG and the building was closed down.

A bizarre scene soon unfolded at the site. Darius Pokoj, a building sub code inspector, appeared at the scene hollering and shouting.

Pokoj seemed to undermine both sets of inspectors at the site.

He would not provide his name to a reporter. He said his father owns the Bavarian Auto Parts shop at 185 Warren Street. He wanted to negotiate with municipal inspectors to restore power to the building.

“We can resolve this matter here,” said the man (pictured, left), who claimed to be an attorney, to David Gilmore, director of Community Improvement.

He then quarreled with a fire inspector.

“What happens when you are working in there and the building falls apart?” the inspector (pictured, center) told him.

The building’s owner George Maalouf is expected to receive a dozen citations for the violations. He was given 15 citations last month when inspectors shut down the building.

Maalouf is expected to appear at the Paterson Municipal Court on Friday morning to answer for the 15 citations.

The city shut down the building for similar violations in 2016.