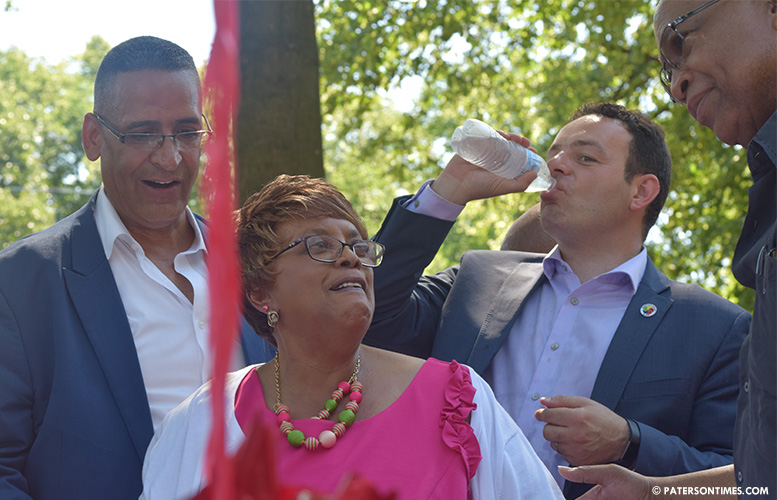 The city bid farewell to outgoing mayor Jane Williams-Warren on her last day in office with a surprise party in front of Eastside Park on Saturday afternoon.

Williams-Warren arrived in a motorcade. She was told there was an emergency that required her appearance. She was taken to the South Paterson substation and led to 620 Park Avenue. She realized what was occurring when she saw two hundred people had gathered, in the excessive heat, to greet her.

“Oh my God. I can’t believe they did this,” said Williams-Warren getting out of her city-provided Chevy Suburban. She was hugged and kissed as she walked few dozen feet to her table at the party.

“We love you!” shouted the crowd as she walked. “Thank you!”

“I just can’t believe everybody’s here for me. Just me. Little old me,” said Williams-Warren. The event with balloons, food, and live music was unlike anything in recent memory. Most of Williams-Warren’s predecessors left office with little fanfare.

Mayor-elect Andre Sayegh, who will take office tomorrow afternoon, described his predecessor as a “class act.”

“You assumed office in a very difficult time in Paterson’s history and you made the most of it. You made us better because of the example you set for all Patersonians,” said Sayegh. “You leave all of us a legacy of integrity.”

Cotton unsuccessfully tried to hold onto the mayor’s seat.

“Mayor Jane Williams-Warren held it down,” said Cotton at the celebration on Saturday. “We went through a trying time.”

“You did the entire city of Paterson a great favor in stepping up and coming in at a time when we needed someone of integrity, honesty, and a beautiful smile,” remarked councilman William McKoy.

McKoy was one of the five votes in favor of her appointment.

Williams-Warren came out of retirement to assume office. She set a different tone from the start of her tenure eight and half months ago. She said she would forgo her pension payments while she earned the $119,000 mayor’s salary.

“I said to the council members, ‘I’m a public servant.’ And that’s what I came in as a public servant,” said Williams-Warren. “I’ll admit the first two weeks were kind of daunting.”

During her tenure, she appointed a new fire chief Brian McDermott and a new police chief Troy Oswald. Both men will serve in their roles for years to come. She took action when she found out the city’s personnel director was working from home by ordering her to report to work.

Williams-Warren engaged the city’s young people through her ambassador program. She included both public schools and charter schools. Young people beautified their schools by painting murals, cleaned up the streets, and took on other projects to improve their community.

When she accepted the post, her nephew said to her, “You know, Jane, this could ruin your good reputation.”

Williams-Warren began working for the municipal government in 1966. After more than two decades as city clerk, she retired in 2014. She appeared glad to return to retirement on Saturday.

“Honey, I’ll be back home on Monday,” she told her husband Albert Warren from the makeshift stage.

“When you are retired, you are looking forward to being retired. It was kind of hard. This was not on the radar at all,” said Warren. He is happy that today is her last day as mayor.