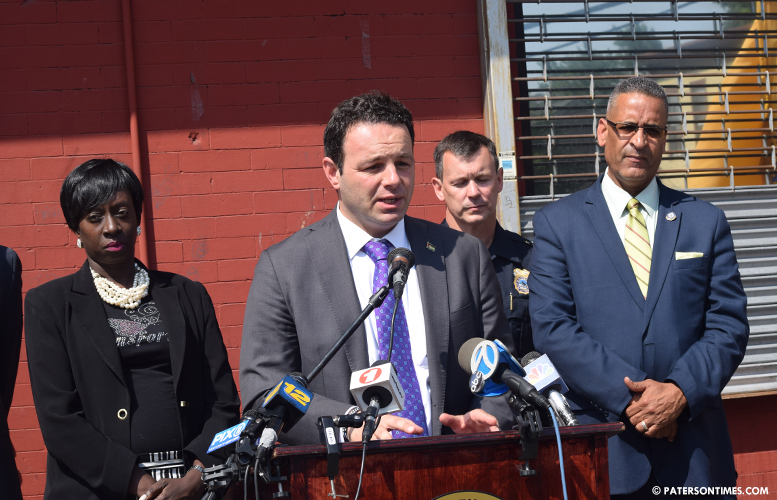 The most violence-plagued intersection in the 2nd Ward – site of three non-fatal shootings in 2018 — is slated to be designated as a hotspot business curfew zone to restore some peace and quiet for Lackawanna neighborhood residents.

Under the designation, businesses at both the intersections of Main and Weiss and Chadwick and Weiss Streets will have to close at midnight. A particular business, Mo’s Low Cost Liquors and Bar, has been destabilizing the neighborhood over the past years.

“That location has become the home base for a large group that assembles every night,” said Patrick Murray, head of the well-respected Ceasefire Unit, on Tuesday night. 20-25 people, who are responsible for drug dealing and gun violence, are outside 620 Main Street every night. “It’s become a danger to the residents of that area.”

On Wednesday morning, municipal officials gathered to declare the status quo will soon be overturned.

A young girl approached Sayegh in the playground of School 8 in June. She couldn’t sleep at night due to the nightly disturbances at the intersection, she told the newly elected mayor. Sometimes she hears gunshots from her house, she told him in front of a reporter.

Some parents complained about the same issues to Sayegh.

“This is going to help us to make this a safer area. To allow the residents to feel safe in their homes and their neighborhood,” said police director Jerry Speziale. Neighborhood residents express immense gratitude when police breakup the gang hangouts in front of the liquor store, he said.

Police received 28 calls for service complaining about loud noise, gang, and other quality of life problems in the first six months of 2018, up from 16 for the whole of 2017.

Some neighborhood residents watched as officials made speeches in front of news cameras from major New York area television stations.

“It’s been terrible,” said a woman, who lives above the liquor store. She is skeptical about the business curfew working at the intersection. When told it has worked elsewhere in Paterson, she said, “It might help a little bit.” Police recorded almost 80-percent drop in non-fatal shootings the first year the business curfew was in place in other parts of the city.

She declined to provide her name.

“What about after the bar closes? People that don’t live here hang out on the street. They stay until 5 a.m.,” said Teresita Moyette, who lives in the Lackawanna section.

Police chief Troy Oswald said the special operations unit will conduct checks every hour. He said those hanging outside will be given court summonses for obstructing passage to a business, an anti-loitering ordinance passed more than four years ago.

“When you start getting tickets for $500 to sit outside a closed bar or a closed bodega, all of the sudden you don’t want to hang out there,” said Oswald.

“I’d like to see some results,” said Sam Scorpo, owner of a restaurant equipment business a block away.

“23 years, I’ve been complaining about this,” said Scorpo.

It wasn’t always a bad area, said Hector Santana, owner of Naguabo’s Bar and Liquor, directly adjacent to Mo’s Low Cost Liquors and Bar. His business has been in the neighborhood for 35 years.

The problem in the area exacerbated over the past three to four years. His hunch appears accurate. Police data shows there were no non-fatal shootings at the intersection in 2014. There was 2 in 2015. 1 in 2016. 1 in 2017. And 3 in 2018. He suggested the hotspot designations in other parts of the city drove the rotten elements to the Main-Weiss intersection.

Santana’s bar serves older people and families, he said. Some of his older customers have been driven away due to the explosion of crime in the area.

Santana had a suggestion for Oswald and Speziale. He suggested police start issuing more tickets to the individuals that hang out in the area.

The city council will take a preliminary vote on the designation next Tuesday. Shahin Khalique, 2nd Ward councilman, who was not present at the press conference, is sponsoring the ordinance to designate the area as a hotspot. If approved, this will be the city’s 18th business curfew zone.

Khalique has largely been missing in action as shootings plagued the intersection over the past months.

The neighborhood shares borders with the 6th and 5th Wards. Sayegh, while councilman for the 6th Ward, repeatedly called for hotspot designation of the intersection.

Luis Velez, 5th Ward councilman, has several times attended Alcoholic Beverage Control Board (ABC) meetings, to seek for the revocation of the troublesome bar’s license. He was at the meeting on Wednesday to call for revocation or a long suspension.

The board scheduled a trial for the liquor business on Jul. 25.

“We want quality of life in our city,” said Velez on Wednesday morning. He said residents have been asking to “do something.”