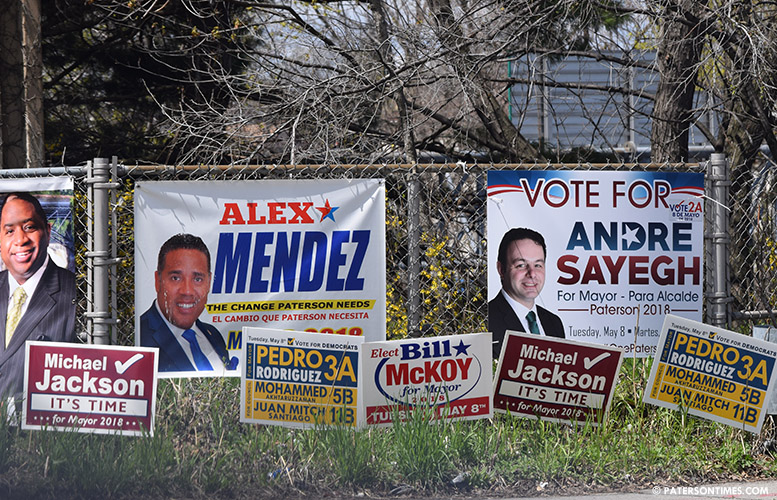 The super PAC that hounded Andre Sayegh’s opponents in the six-man mayoral race, sending out a number of unflattering mailers, spent $137,904, more than Michael Jackson and William McKoy combined, to get the mayor elected to office.

Sayegh won a landslide victory, receiving more votes than the second and third place finishers put together in the race, partly due to the assistance of the Progressive Values Committee of Bayonne.

“Wow. It’s good to have friends in high places,” said William McKoy, who finished fourth place, when told of the super PAC’s spending in the race. “I think the playing field was not level to have that kind of money supporting a particular candidate. My ultimate position is that the voters of Paterson had choices and made their choice. At this point, we move forward.”

“As an independent expenditure committee, there was no coordination whatsoever with the Sayegh campaign,” said Waks. During the election, some of Sayegh’s opponents alleged there was coordination between the super PAC and Sayegh’s campaign.

Ed Farmer, who raised funds for Sayegh, is a part of the Progressive Values Committee. He is also chairman of the One Paterson Foundation, a civic organization created following Sayegh’s election.

“That was an independent expenditure that was not affiliated with my campaign,” said Sayegh.

Former school board member Pedro Rodriguez, who finished third in the race, said the group made a big investment now it is expecting a return. He alleged the return on investment will take the form of contracts and jobs from the municipal government.

Sayegh dismissed Rodriguez’s allegation that his administration is “doubling down on corruption.”

“Pedro has a habit of making erroneous and outrageous statements. I agree with Bill McKoy: the election is over,” said Sayegh. “It’s unfortunate that Pedro is rehashing the same baseless rhetoric that he used during the campaign.”

What does Waks expect in return? He took exception to the question.

“I have not asked for anything nor do I expect anything from Andre or anyone else, now or in the future. I have roots in Paterson and would like to see it thrive and prosper,” said Waks.

Waks and Sayegh go back to 1996. “He was my intern when I served as press secretary to Congressman Bill Pascrell, Jr.,” said Waks. “I think Andre is an exemplary human being and I am elated that he now is serving the people of Paterson as mayor.”

Rodriguez was not convinced Waks helped Sayegh for humanitarian reasons.

“Not only do I not buy that, he believes the people of Paterson are naïve. He either thinks we’re naïve, stupid, or we don’t think. There’s no way anyone will give $138,000 to a single candidate just for the love of the people,” said Rodriguez.

“Now, he’s going to end up buying the Paterson Armory,” said Rodriguez. Florio made a $3 million offer, described as extremely attractive by council members, for the fire-damaged building.

The six men and the super PAC spent $1.16 million in the mayoral race. The breakdown is below:

Mendez, who finished second, did not respond to a call for comment on Monday afternoon.