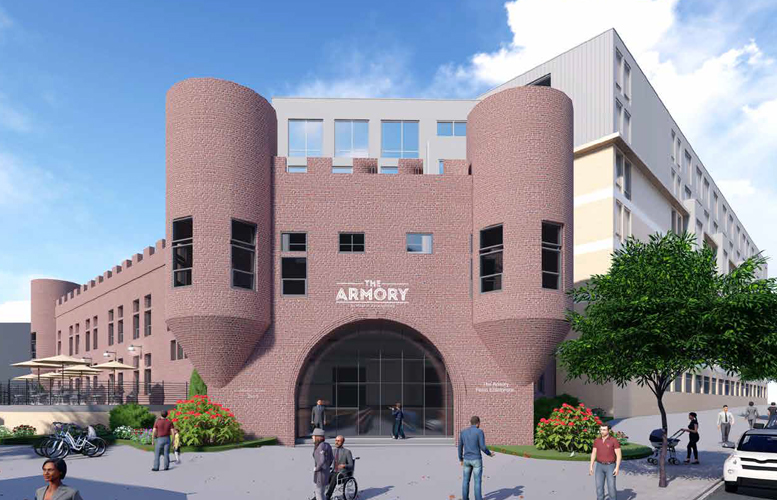 Florio, who is purchasing the fire-damaged Paterson Armory which has been decaying for decades for $3 million, estimates the project will cost $17 to $20 million. His plan preserves the remaining portion of the 19th century building.

He reckons the project will be completed in 18-24 months. His team came prepared with a PowerPoint presentation that featured glossy renderings of the six-story building that will go up on corner of Market Street and Rosa Parks Boulevard.

“The main driver behind the concept was to preserve the existing façade of the building. We’ve preserved the skin of the building. The mixed-use building happens behind that,” said Victor Rodriguez, design director for DRG Architects, as the rendering showing the front of the building, shown above, appeared on the overhead projector. “It’s a way of celebrating this building.”

Rodriguez said the main entrance into the building is through the existing arch of the Paterson Armory. A restaurant will be on the first floor and a co-working space will be on the second floor.

“I’m impressed. I grew up here. I went to Eastside High School. I used to walk in that area a lot,” said council president Maritza Davila after the presentation. “I want our city to come back to what it was once.”

For the past two decades, Paterson has attempted to sell the property and use the Paterson Parking Authority to rehabilitate it. Neither materialized. In the meantime, the property remained an eyesore and yielded zero dollars in tax revenue.

“Beautiful,” remarked Luis Velez, who represents the 5th Ward, where the Paterson Armory is located. “I cried when the Armory caught fire and came down.” In late 2015, the building caught on fire, resulting in much of the structure being demolished, costing homeowners more than $1 million.

Velez suggested Florio set-aside some space for a police substation.

“Stevie Wonder could see the benefit of that plan,” said Michael Jackson, 1st Ward councilman, a perennial skeptic. “It’s not big pimping. It’s not an effort to pimp our community.”

Florio nodded in agreement from the audience. He is neither seeking tax credits nor tax abatements for the project. He plans locally source material and labor.

Jackson has criticized other developers for seeking tax abatements and other government inducements to put up low-income housing that benefits them at the expense of the community. He suggested Florio use some of the spill over materials from his project to make some improvements at Bauerle Field.

William McKoy, 3rd Ward councilman, suggested the developer create underground parking. The project includes 138 parking spaces. He noted the Paterson Armory had a three-level basement that has been filled in with dirt following demolition. He also suggested a bowling alley at the site.

McKoy said he hopes the developer remains faithful to the proposal presented to the council. “We want to make sure we don’t have a bait and switch,” he said.

Mayor Andre Sayegh said the redeveloped Paterson Armory has the potential to lift the entire neighborhood.

“There will be a ripple effect,” said Sayegh.

Sayegh and Florio had a brief conversation following the presentation to the council.

“Can you produce?” asked Sayegh.

“I can produce,” replied Florio.

Sayegh plans to present a measure to the council to approve the sale next Tuesday. Florio will have to go before the Paterson Planning Board and then secure construction permits before construction can start.

“I’m encouraged to see an investor doubling down on the city,” said Flavio Rivera, at-large councilman. “I hope other investors follow his lead.” A second developer, BlueOnyx, made a complex — the kinds of offer Paterson is accustomed to — $1.9 million offer for the Paterson Armory.

Florio has changed the game and may have opened a new chapter in the way future developments will be done in the city. In the past, government officials had to beg to get developers to build, even after offering a great deal of incentives like tax breaks and streamlined approval process.

“This is setting the bar where it needs to be,” said Jackson. 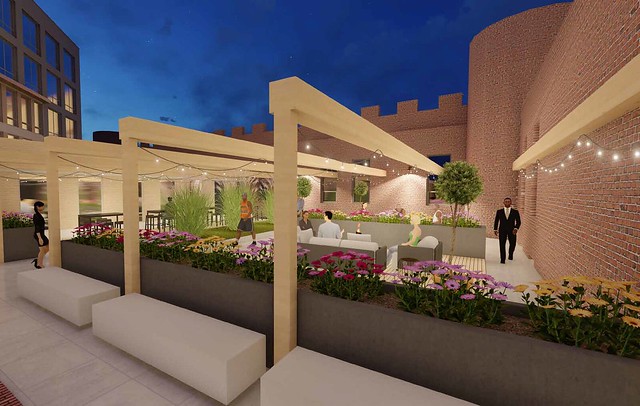