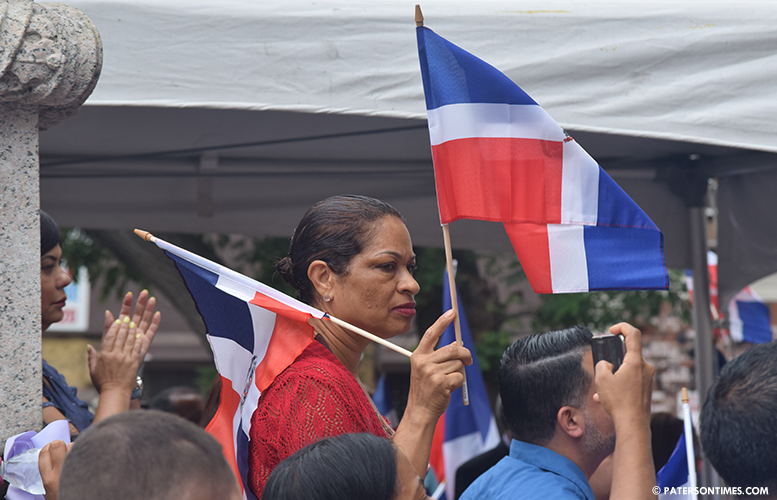 The city’s largest Hispanic community raised its flag at City Hall over the weekend ahead of the 29th annual Dominican parade.

Elsa Mantilla, organizer for the parade, said Saturday’s flag raising is the community’s 35th. She was joined by municipal, county, state, and federal officials at the ceremony outside the historic City Hall.

“Everybody’s Dominican today,” congressman Bill Pascrell told a crowd of more than 125 people at the event. “It’s a very vibrant community, the Dominican community, not only in Paterson, but all over. That energy must be used to get Dominicans in this country involved in this country. We’re Americans when you come here. We must fight to make sure they are accepted as every wave of immigrants in the past.”

The city is home to more than 45,000 residents of Dominican heritage. People from the Dominican Republic began arriving in Paterson in 1947, according to municipal records.

“Paterson is a mini Dominican Republic in certain ways,” added mayor Andre Sayegh. He cited the many Dominican restaurants on Market Street and Park Avenue.

The Dominican community has often found itself badly divided. For example, the community was split in the recent mayoral election. Some backed former councilman Alex Mendez and the others backed former school board member Pedro Rodriguez.

On Saturday, a small group boycotted the flag raising. Santos Joaquin, head of the Paterson Progressive Movement, put out a recording urging Dominicans to boycott the flag raising. In his recording, he accuses the organizer of politicizing the event.

Mantilla allowed school board member Oshin Castillo, who is running for re-election, to serve as emcee for the flag raising.

Joaquin’s son Ramon is running for a school board seat. Some speculated Joaquin’s call to boycott involved Mendez and Rodriguez.

“That’s not true,” said Rodriguez, who was vacationing with his family in Pennsylvania. “If I was in Paterson I’d definitely be there.”

“I’m not a fan of boycotting events,” said Mendez. He was present at the flag raising.

Mendez and Rodriguez have joined forces to back a slate of candidates for the November school board race. Their slate includes Ramon.

Ramon was in the Dominican Republic on Saturday. He said he wasn’t boycotting the event.

Mantilla said the parade will begin at 12 p.m. on Sunday at East 33rd Street and Vreeland Avenue. She said this year there’s no festival following the parade. Last year, the festival was marred by violence perpetrated by the Trinitarios, a Dominican street gang.

“I don’t want to take a risk,” said Mantilla. She said next year, she hopes to have the festival either at Eastside Park or at the Garret Mountain.