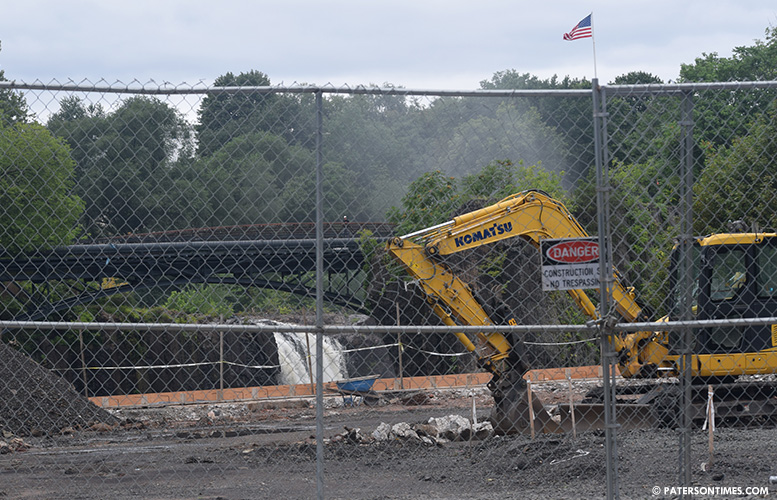 The company handling the renovation of Overlook Park at the Great Falls National Historical Park has told municipal officials there is lead contamination — abatement of which carries a price tag of hundreds of thousands of dollars — in the walls of the former steam plant foundation.

Municipal officials said Applied Landscape Technologies of Highland Park took paint samples from the site and conducted tests that showed elevated levels of lead. “The contractor did some testing on the paint and gave us the test result,” said Gianfranco Archimede, director of the Historic Perseveration Commission, who is overseeing the Overlook Park renovation project.

Mayor Andre Sayegh said abatement cost runs ranges from hundreds of thousands to a million dollars. Archimede said he did not have an estimated cost figure for lead abatement for the site.

But, inspectors from the Division of Health, lead by acting health director Paul Persaud, did not find elevated lead levels at the site. He sent samples to a United States Environmental Protection Agency (EPA) certified laboratory for further testing.

“We knew our machine was right. We did the lab to validate our result,” said Persaud.

An executive for Applied Landscape Technologies declined to comment on Tuesday afternoon.

“We’ve been taken advantage of. They are ripping us off,” said councilman Michael Jackson, who criticized the $3.2 million renovation project.

Jackson late last month argued the city is not doing enough to hold contractors accountable. He said the city is failing to question the contractor’s recommendations. His comments came after the city sought to increase the Applied Landscape Technologies’ contract by $92,000.

The increase was needed to pay for the removal the concrete footing 6-8 inches below grade, an unforeseen discovery that was made during the course of demolition of the parking lot, by chopping, cutting, and excavating the upper parking lot.

Jackson wanted to know why the concrete footing had to be removed. He and other council members were unsatisfied with the explanation Archimede provided. He again criticized Archimede on Tuesday morning.

“Why’s he the project manager on something like this? He has no construction experience. They can tell him anything,” said Jackson.

“That’s actually not true. He has managed other projects,” said Sayegh of Jackson’s comment about Archimede.

The construction is being overseen by landscape architectural firm ETM Associates of Highland Park.

Councilman William McKoy has criticized ETM Associates for providing scant explanation for the $92,000 change order that was narrowly approved late last month. Some council members wanted the architect to appear before them to provide a detailed explanation.

Without a second check by Persaud’s department, the city would have faced with another change order to spend hundreds of thousands of dollars or a million for lead abatement, said Jackson and other officials.

Jackson said that would have benefited both firms handling the project.

The mayor said the discussion about the contractor’s lead contamination discovery at Overlook Park emerged at a cabinet meeting.

“We can use our machine to look at this,” Persaud reportedly said during the discussion.

Sayegh said the city could not afford to pay the contractor for lead abatement. He viewed the entire situation as a collaborative effort between different departments in his administration that has helped to avert a large expense.

The contractor hasn’t accepted the city’s test results. Both sides have to agree on whether there is or there isn’t lead in the walls.