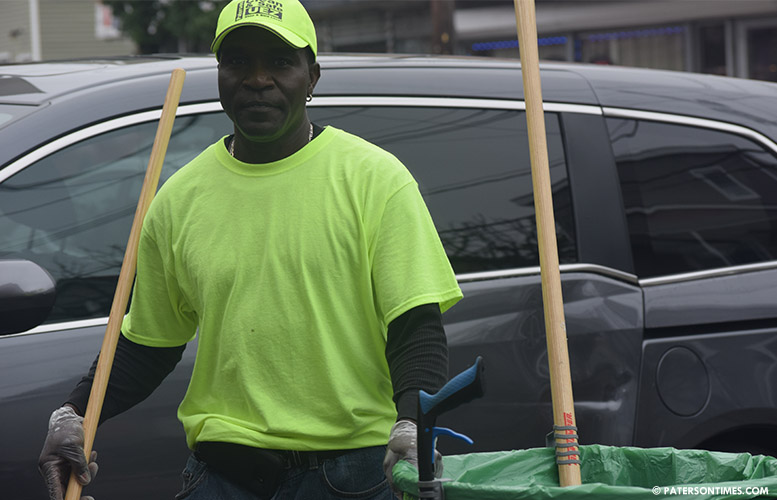 Mayor Andre Sayegh’s administration has deployed more than a dozen people to clean-up commercial thoroughfares throughout the city.

“We want to make Paterson cleaner, particularly in our commercial corridors,” said Sayegh, standing in front of a podium across the street from School 21, on Wednesday morning. A small group of school employees watching the press conference from the steps of the building cheered for the mayor.

17 people have been hired for the mayor’s initiative. 7 more are on the way, said Penni Forestieri, director of the city’s Urban Enterprise Zone (UEZ). She said the employees will work 20 hours a week at $14.42 an hour.

Forestieri said the program has a $298,000 grant-funded budget. She said the new employees will clean-up 26 locations in areas designated as urban enterprise zones. The program launched today and will continue into mid-October, she said.

She expects to spend $85,000 for the first session of the initiative. A new session will begin next year.

The mayor’s “clean team” will pick up bottles, debris, and other trash. They will handle weeding and clear traffic and utility poles.

Some businesses welcomed the mayor’s initiative.

“I definitely think it’s going to work,” said Juan Cortes, co-owner of All Starz Barbershop. “It’s definitely a good idea. You’re giving job opportunities to the people, to the city.”

Cortes has been operating his business for the past three years, he said.

“It will make it a little better, little by little,” said Estrella. “We need a couple more containers to keep the area clean.”

Estrella said the trash receptacle in the corner is not enough.

“We try to keep the area clean, but it’s hard to deal with people,” said Estrella.

Cotton said the initiative is the first step to clean-up the city’s dirty streets.

Sayegh campaigned to clean up municipal streets. He touted the program as a job creator for city residents.

Public works employee William “Billy” Rodriguez started his career in the city as a “can man” 21 years ago.

Rodriguez’s picture appeared in the newspaper when then-mayor Martin G. Barnes launched a program to clean the city.

Rodriguez is now director of the Department of Public Works.

“That’s incredible. It proves that it could provide a path for people to be leaders. He went from a can man to director of the public works department,” said Sayegh.