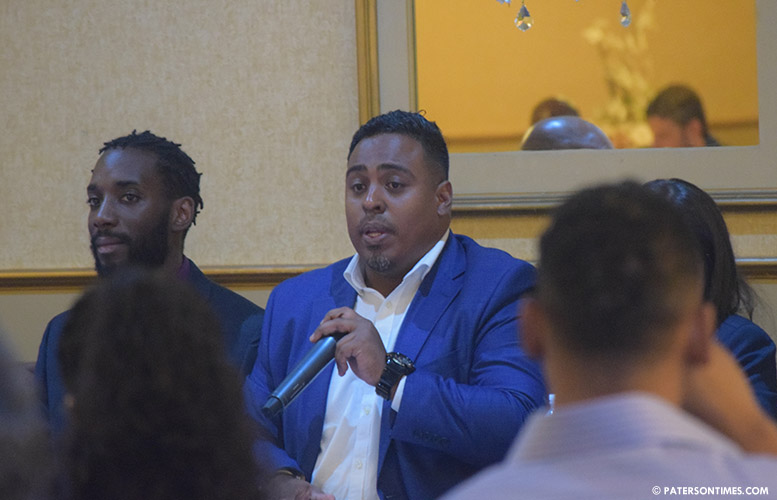 Some of the challengers in the 17-person school board race struggled to answer questions at the first Board of Education election debate last Thursday.

Some of the candidates were asked about the so-called school-to-prison pipeline.

“I’m not familiar with that program,” said Eddy Olivares. “I can tell you that in general, I have worked as a sociologist, with the inmate population with different programs, educating and making the transition from incarceration into the general society.”

“I’m not familiar with any of the schools to be honest,” said Eduardo Lanchipa (pictured, center). “But, I believe this program has a purpose.”

The school-to-prison pipeline refers to students from disadvantaged background being harshly punished and pushed out of the schools into the jails.

Incumbent Nakima Redmon told the almost 65 people at the debate the district has implemented changes to reduce out-of-school suspension that forced students onto the streets.

Incumbent Vincent Arrington said low reading scores spell trouble for students. He said the district has started a reading program to keep students away from the so called pipeline.

Police officer Eddy Pichardo touted two new programs launched earlier in the month to steer young people away from drugs and towards careers. He and policewoman Irsi Velez are running the two programs.

Pichardo appeared late at the debate. When he was allowed to give his opening statement, he mentioned his name, apologized for being late, and thanked both the organizers for putting on the debate and the candidates for appearing. He then turned to incumbent Manny Martinez and asked, “What should I say?”

The attendees at the debate wrote questions on index cards and gave them to moderators to ask candidates.

Some questions were directed to specific candidates.

Challenger Amany Ramadan was asked to state a board policy she would change or amend if elected.

A second individual question was directed at challenger Justin Rucker. He was asked what’s one initiative he would push for if elected to the board.

“My first initiative would be to raise the minimum passing grade from 60,” answered Rucker. He said having 60 as a passing grade is “unacceptable.” He wants to raise it to 70.

Rucker is few years late with his initiative. Former superintendent Donnie Evans talked about raising the minimum grade to 70 for years. Last school year, superintendent Eileen Shafer began the process to raise the passing mark from 60 to 70 over a three-year period.

“I believe by present they mean active,” the moderator told him.

“You really don’t have to have the presence at the school on a daily basis,” said Olivares. He said parents can be reached on the street and in after-school setting. “We’re concentrating too much energy on the school setting.”

The incumbents avoided stumbling at the debate. Some of the better performing challengers of the night were Nelly Celi, Corey Teague, Melissa Baralt, and Eddie Gonzalez, according to observers

“If you are satisfied with what you are getting from the school system then I urge you to continue voting the way you have in the past,” said Baralt. “But if you dare to be a catalyst for change” vote for Paterson Education First team.

Baralt said her team is made up of people “prepared” and “qualified” to remediate the city’s school system.

“People say we need to change the direction. If we’re heading in the right direction, why do we need to change it? Why is change necessary? Change for the sake of change?” said Martinez, urging voters to “stay the course” by supporting the incumbents. “This is not the time for on-the-job training. There’s too much at stake.”

Former school board member Gonzalez tried to imprint his ballot position on voters’ minds. He told voters to think of his position, 9K as K-9. He said he will fight to ensure students are being provided a decent education.

“Let me be your pit bull on the board of education,” said Gonzalez.

Gonzalez is a high-ranking official at the New Jersey Community Development Corporation (NJCDC). He touted the nonprofit’s role in recently constructing two playground and building the Great Falls Youth Center on Spruce Street.

Gonzalez played a role in constructing the playgrounds and building the youth center.

Joaquin urged voters to throw out the incumbents.

“We must change the board. We must do something different,” said Joaquin. He said his team wants to open a trade school in one of the city’s high schools to provide vocational training to students.