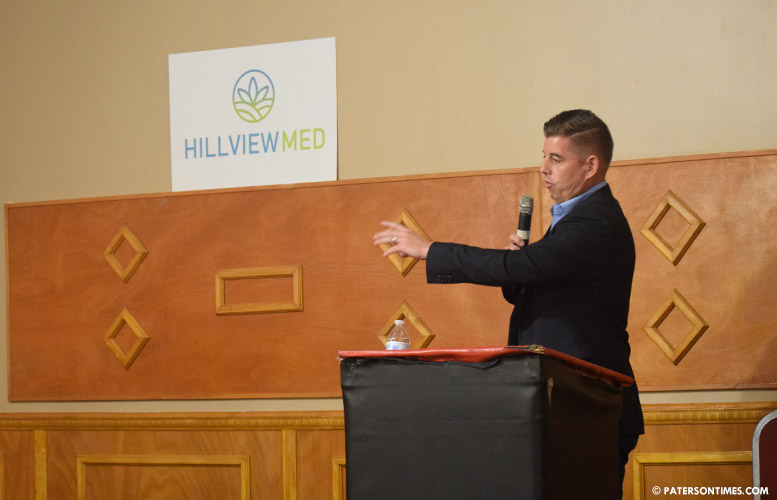 A Morris County start-up is planning to invest $1.5 million to open a medical marijuana dispensary two blocks away from St. Joseph’s Regional Medical Center in the Lackawanna neighborhood.

“My grandfather delivered tomatoes here in Paterson 50 years ago. My dad was born in Paterson,” said Vrede. “One of the reasons I picked Paterson is because it’s close to my family’s heart.”

Vrede’s firm has applied for one of the six licenses New Jersey has made available. The New Jersey Department of Health has received 146 applications from 103 organizations for the licenses. The state was expected to announce the winning applicants on Nov. 1, but has delayed the selection process.

A rendering of the proposed dispensary at 80 Levine Street.

The state has to review 43,000 pages of documents. On average an application is 300 pages, according to the state. Winners will be announced “as soon as the review is complete.” Some expect that to happen in November or December. The state currently has six medical marijuana dispensaries.

Vrede’s firm will start operation 3-4 months after getting the license, he said. He said the plant will create 30-40 jobs in the city.

“We plan to build a job training program We want to empower Paterson residents,” said Vrede (pictured). His company was part of an event at the Masonic Lodge on Saturday afternoon to gauge the community’s response to the proposal.

More than 50 people attended the event. Many favored having a medical marijuana dispensary in the city.

“I’m for it,” said Glorious Shabazz, a city resident, who was there with his wife Nichol.

His wife said the plant will bring revenue to the city to help reduce property taxes. She also sees the project as a jobs generator.

“I don’t think the dispensary will have a negative impact,” said the husband.

“It will probably have a more positive effect,” added the wife.

“There’s room for some negativity. As long as it doesn’t get into the wrong hands,” said Hassan McComb, a city resident.

Shabazz, who works as counselor, said he witnessed first-hand the positive affect of medical marijuana on people suffering from anxiety.

“There’s thousands of people with medical issues and this plant could change their lives,” said Nelson Guerrero, president of the Cannabis Culture Association, a group pushing to ensure minorities have a stake in the industry.

Guerrero’s grandfather, who had stage four cancer, benefited from using marijuana when he was going through chemotherapy, he said.

“I have seen firsthand how this plant can change lives,” said Guerrero. “His life was saved by this plant. Unfortunately, it’s still demonized and stigmatized.”

Guerrero, who is Hispanic, founded the Cannabis Culture Association with Jake Plowden, who is African-American, in 2016. Both men attended a cannabis industry conference in New York City.

“There was no one that looked like us. That’s how we became friends,” said Guerrero.

“Too often, when you look at the statistics, we fill the prison, we fill the parole hearings, but we do not fill the industry. That needs to change on a massive scale,” said Plowden.

The dispensary will create ancillary business opportunities for city residents, said Plowden. His group hosts events to guide people on how to start businesses in the marijuana industry.

Having a dispensary could give the city a boost once marijuana is legalized. New Jersey could be the biggest recreational market in the North East.

“Legalization is inevitable,” said mayor Andre Sayegh, who supports the project. “We’re in no position to turn away potential revenue.”

“Adult use is coming. We can really help the city and really bring jobs and economic development to the city,” said Vrede.

Vrede said cannabis will be grown for the dispensary at his family’s Pequannock facility that currently grows tomatoes.