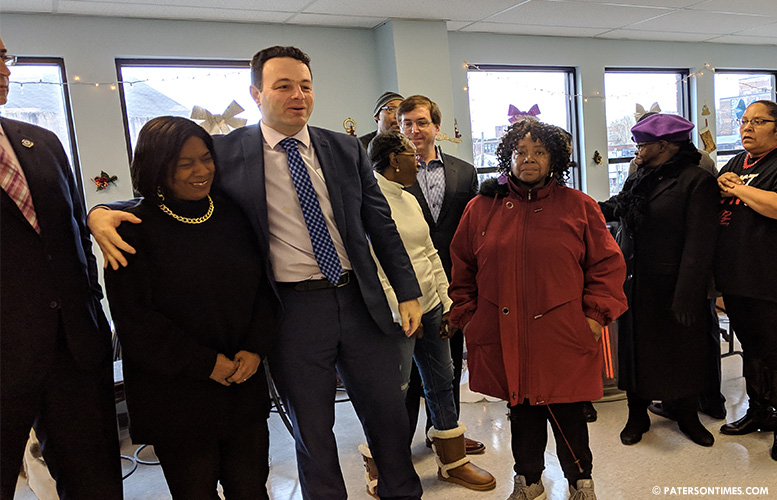 After his predecessor almost destroyed the Neighborhood Assistance Office (NAO) by moving it to a remote section of the city, mayor Andre Sayegh had the office relocated to downtown Paterson.

“Our administration is committed to accessibility. We want to make sure we can better serve our residents. We feel this location is ideal because you have a bus stop not too far from here and there’s parking that’s available,” said Sayegh on Wednesday morning at the new home of the Neighborhood Assistance Office on the second floor of 77 Ellison Street.

Number of clients served by the office dropped from 5,000 people per month when it was operating out of 125 Ellison Street to under 1,000 after it was moved to 147 Montgomery Street, according to Nancy Grier, who heads the Neighborhood Assistance Office.

Former mayor Jose “Joey” Torres moved the office out of downtown Paterson early last year. Since then, the number of clients served by the office precipitously dropped, as the program was mostly helping ex-convicts re-entering society through former governor Jim McGreevey’s reentry program.

McGreevey’s program was run out of the same building, which was renovated used $180,000 in federal grant funds. The reentry program is moving out of the site.

“We finally got this to where it needs to be,” said Ruby Cotton, 4th Ward councilwoman. She opposed Torres’ decision to move the office to Montgomery Street and favored bringing it back to downtown Paterson.

Neighborhood Assistance Office helps residents to find jobs, apartments, and social assistance. Grier runs the program with seven regular volunteers. The program has a $75,000 budget, according to municipal officials.

“It has helped so many people,” said Cotton.

The program’s new location is in a building owned by the Paterson Restoration Corporation (PRC) which leases 8,532 square feet of space to the city for $350,000 per year. The city, which has a 15-year lease, runs its television studio and digital library out of the building.

Grier’s program takes up approximately 1,500 square feet of space, estimated economic development director Michael Powell. Powell said rent for the space won’t come out of the programs $75,000 budget. He said the city will install signage outside of the building for the Neighborhood Assistance Office. On Wednesday morning, the new space did not have sufficient heat, forcing the use of portable heaters. A city employee was seen attempting to fix the heating issue.

“I’m grateful,” said Grier of the move. She moved to the new site last week and is still unpacking. She hopes to rebuild the number of people served by the office to above 5,000 people per month.