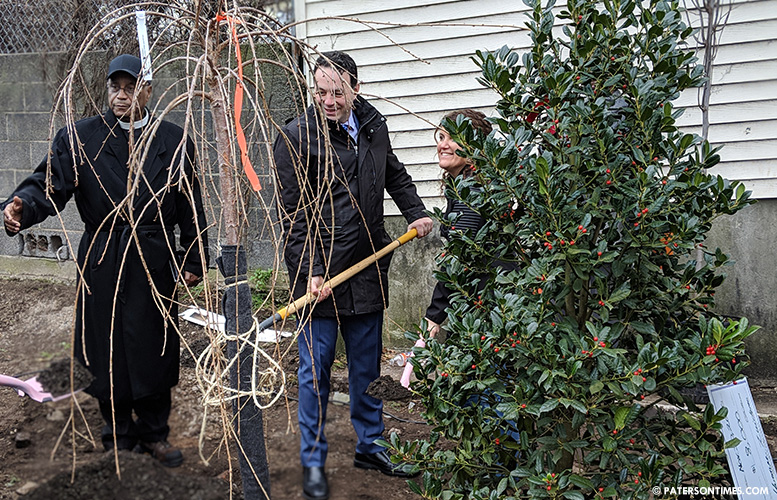 Mayor Andre Sayegh and others planted a weeping cherry tree on the corner of Auburn Street and Governor Street on Friday morning, reviving a dormant project called the Martin Luther King, Jr. Park.

The revived project is being spearheaded by the Paterson chapter of the Habitat for Humanity and a dozen partners. The new park on two lots – one 47×56 and another 30×53 – will feature a rain garden, a walkway, and pathway with the revered civil rights leader’s sayings.

A little library, an iron fence, gate, wall for mural, and two lamp posts will be installed as well, said Veronica Rogers of Habitat for Humanity, project manager for the park.

“Today, we’re celebrating a gradual transition of a neighborhood. This was an eyesore and crime magnet at one point,” said Sayegh. “We’re stepping up, united as a community, as one Paterson, and saying, ‘We’re taking the neighborhood back.’”

The project is being undertaken by the Bronze Heat of Paterson, City Green, Over the Edge Excavation, the city, Paterson Smart, Regency Elevator, Rutgers Cooperative Extension, and United Way of Passaic County.

“It’s always been City Green’s vision to be able to provide trees, flowers, and beautiful spaces to the City of Paterson,” said Jennifer Papa, executive director of City Green. Her organization provided Holly, redbud, and weeping cherry tree plants for the park.

Rogers said the project has a $125,000 budget (inclusive of in-kind contributions). The United Way provided an $8,000 contribution to the park on Friday. She said the park is scheduled for completion in April.

The park will be accessible to the visually impaired.

“They are going to be able to experience the path through Braille,” said Rogers speaking of the pathway with MLK quotes.

The project was dormant for the next almost five years.

Pastor Allen Boyer of historic Bethel AME Church, across the street from the park, has been waiting for the past years to see movement in completing the park. He is optimistic it will be completed next year.

King visited Bethel AME Church in 1968. Some like former policeman Benjamin Leak and businessman Russell Graddy were there when he visited the city. Both men were in attendance on Friday.

“He came here and he gave us life,” said Graddy.

Graddy left the South for Paterson to escape discrimination. He found a racist town, but not as extreme as the South.

“As an African-American you couldn’t cross East 33rd Street. If you crossed 33rd Street, somebody would come and stop you on the street and say, ‘What are you doing here? Go back to where you belong.’”

Much has changed in the Silk City. The council president is a woman of Hispanic descent and the mayor is of Arab heritage.

Graddy hopes the corner, where the new park is located, too changes for the better.

The location of the park was once an eyesore, said Passaic County freeholder Theodore “TJ” Best, who lived two blocks away half-decade ago. A house that stood on the site was used by drug addicts. It caught on fire and had to be demolished years ago, he recalled.’

Best grew up on 12th Avenue and Rosa Parks Boulevard.

He said the city and other partners should apply for county funding. “This is a prime project for county open space funding,” said Best.

“Things are going to start to change,” said Ruby Cotton, 4th Ward councilwoman. “You can see the neighborhood is trying to transform itself and change for the better.”