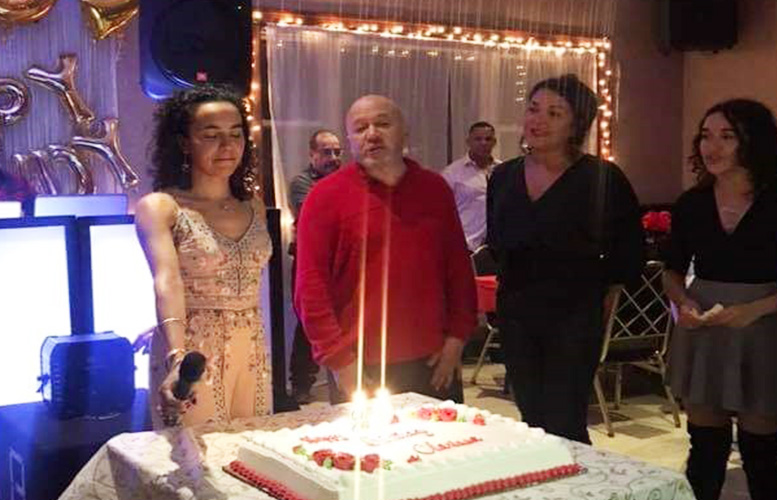 Former mayor Jose “Joey” Torres celebrated his freedom after 13 months of incarceration in state prison at his daughter’s birthday party, dubbed by some as the disgraced mayor’s “After Release Party,” at the Firemen’s Hall on Friday night.

Torres, who was released from state prison last Wednesday, did not speak at the event. Clad in a red sweater, he shook hands and thanked those who attended.

Among the prominent attendees were state senator Nellie Pou and council president Maritza Davila. Approximately 100 people attended the party at the Firemen’s Hall on Walnut Street. Event was catered by the Brownstone House.

Two days earlier, the former mayor had completed 392 days in prison for stealing from taxpayers. He had used public employees to renovate a warehouse leased by his daughter and nephew, according to prosecutors.

At first, Torres argued he was innocent. He later pleaded guilty and received a five-year sentence. He became eligible for parole in November.

Friday’s event was billed as his daughter Clarissa’s birthday party. But it was attended by many of her father’s political friends. Among the attendees were some municipal employees.

Torres tried to influence politics in the Silk City from behind bars earlier in the year. His candidate for mayor was police officers’ union president Alex Cruz.

Cruz finished last in the six-person race. His candidacy was dogged by questions of residency. He claimed to live in Paterson while his wife and children resided in Little Falls. A judge cleared him to run.

The ex-mayor’s release from prison may not bode well for Sayegh. Torres may exercise his influence with municipal employees to undermine Sayegh’s administration, according to political insiders.

Sayegh has had a tough December. A series of stories highlighted questionable dealings and incompetence in his administration. His business administrator had approved a 6-percent longevity pay raise for the city’s new personnel director. An ordinance bars the practice. The increase was later cancelled.

Sayegh’s lobbyist ally, Bill Pascrell III, managed to get a lucrative contract for his client. The client gave $400,000 to Pascrell’s lobbying firm since 2011. Another one of the mayor’s ally received a 75-percent increase in his grant writing contract with the Paterson Parking Authority.

His administration’s failure to resolve a contract dispute with police chief Troy Oswald led to a lawsuit last week.

Some of Sayegh’s supporters, who expected reform and big changes in governance, have become disillusioned with the new mayor. Nine of the mayor’s supporters were interviewed over the past month. He has held a series of press conferences, many redundant, but hasn’t pushed for any bold and ambitious initiatives since taking office on Jul. 1, they said.

Sayegh has adopted ex-mayor Jeffery Jones’ failed approach to governing, according to some of the mayor’s supporters. Jones has been called the worst mayor in the city’s history. Some of Jones’ supporters claim his administration was sabotaged by some of his rivals.

Jones had given his cabinet members full autonomy to run the government. Similarly, Sayegh has granted a great deal of autonomy to his directors.

Jones’ directors were ineffective in running the city.

At this point in his reign four years ago, Torres had begun to push for his signature items. $37 million road repair plan. 25 new police officers per year. And a 50-person special police force.

Sayegh’s biggest accomplishment so far has been switching employees to the state health insurance program. But the move had been talked about for years and previous administration officials had said the move would occur in late 2018. Move is projected to save $20 million per year.

Sayegh will find it difficult to gain support for his initiatives as ward council members prepare for re-election 17 months away, according to observers.

Torres continued to celebrate his freedom on Saturday. He attended an ugly sweater party at Cruz’s house in Little Falls.