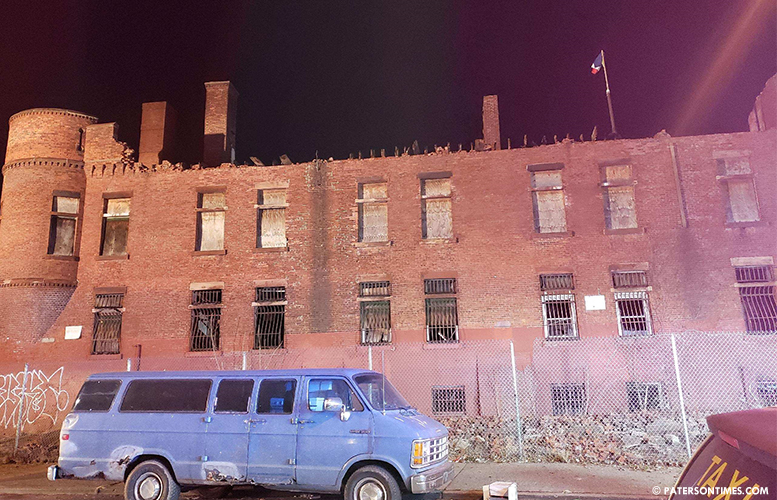 The parapet wall of the Paterson Armory on the Market Street side collapsed on Monday evening.

Municipal officials said a 20 feet long piece of the Paterson Armory came down at about 6:39 p.m.

“I heard a big explosion. It shook the office,” said Edgar Collazo, owner of Five Star Transportation on Market Street. His office is across the street from the Paterson Armory, he said.

Collazo said several dozen people came out of their homes and businesses to see what caused the loud sound.

No one was injured in the collapse, said deputy fire chief Pablo Del Valle. He said the affected area was cordoned off for safety.

“I’m concerned that structure could come down,” said councilman Luis Velez of the 5th Ward. “It will be good to save a piece of history.”

Municipal officials have to determine whether the collapse warrants demolition of the fire-damaged structure.

Economic development director Michael Powell said his building department has yet to make a determination whether the collapse requires demolition of the building. Construction official Gennaro “Jerry” Lobozzo has to make the call, said officials.

The city sold the building to prominent developer Charles Florio for $3 million in the summer.

Florio said the building may have to be knocked down.

“It will not deter me to redevelop the property. I plan to turn the site into the best development in Paterson. I understand it was a historic site but fire after fire left the site it seems in disrepair,” said Florio in a message. “I will ask my team of designers to do something to honor the past while moving forward with the future.”

Florio unveiled an ambitious plan to build 138 luxury apartments and 10,000 square feet of retail space at the site for $20 million. He envisaged preserving the remaining portion of the 19th century building.

A massive fire destroyed much of the Paterson Armory in 2015. There have been grand plans for the site over the years, but none of them came to fruition.