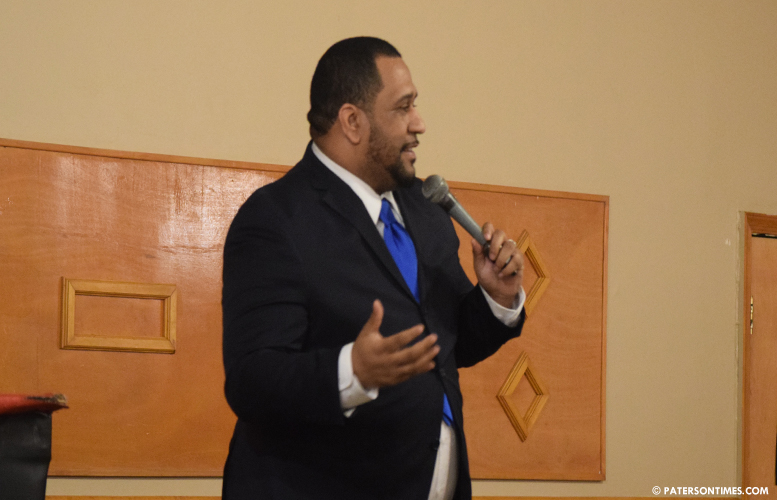 Incumbent school board member Emanuel Capers launched his re-election bid on Thursday night, nine months ahead of the race, before a crowd of several dozen people at the Masonic Lodge on Broadway.

“I’m proud of the work we have done. We still have a lot of work to do,” said Capers in front of 70 people.

Capers, 33, was first elected to the Board of Education in 2016. During his two years on the board, Capers crackdown on rotten bus companies, abolished the infamous rubber room, and prodded the district to properly implement a curriculum to ensure African-American history is taught in schools.

The district sent a dozen teachers to Kean University over the summer to receive training on implementation of the Amistad curriculum, he said. State law requires public schools to incorporate black history into their social studies curriculum. Many districts have largely ignored the law.

As he continued to list his accomplishments, he said he forced school bus companies to use newer vehicles. One firm that had the most violations — drivers without commercial driving licenses, failure to pick up students, and other infractions – was banned from receiving district contracts for two years.

“Our kids are safer in updated buses,” he said after the campaign launch. Last year, the number of violations committed by bus companies dropped by 82-percent. He also pushed for measures to reform the way the district handled investigations of allegations against staff members.

Capers wrote a policy that required the district to complete investigations within 30 days, he said. He later convinced his colleagues to pass a policy to abolish the rubber room which was used as a holding place for teachers under investigation.

Some teachers were kept in isolation at the rubber room for years.

“I’m proud of this young man,” said assemblywoman Shavonda Sumter as she endorsed Capers for re-election.

Some of his school board colleagues – Oshin Castillo, Nakima Redmon, and Manny Martinez – appeared at his campaign launch.

Capers has been successful in working with both fractious factions on the school board. He still faced some problems on the board.

Capers was the subject of two ethics complaints. One filed by the Paterson Education Association, the teachers’ union, after he made a post on social media that attached a video, where a teacher is delivering a threat laced with racial epithet and profanity to a group of rowdy students. The teacher resigned soon after the incident was reported in the news.

Both Capers and the union settled the case. He had to issue an apology. Another was filed by James Smith, former head of security at the district.

Smith alleged Capers violated ethics laws by going on a trip to Arizona paid for by a potential vendor.

The second case has yet to be resolved.

Capers said his trip to Arizona benefited the district. This school year, the district passed a measure to implement the Woz U Education’s free online computer sciences courses – full stack web development, mobile development, and cyber security — for grades 11 and 12.

Smith was suspended two months ago pending an investigation.

When asked why did he launch his campaign unusually early for a school board race, Capers said his wife is expecting to give birth to a son on Mar. 4, 2019.

“I’m going to lose time, so I said let me do this early,” he said. He said he will be spending the next months taking care of the newest member of his family.

Capers dismissed suggestions he may be vulnerable in the November race. He called himself the “frontrunner.”

“I’m not fearful of anything,” said Capers. The launch event raised $1,300, he said. “I wasn’t pushing for fundraising.”

Capers has plenty of time to raise funds.

The school board field gets set in late July. Last year’s race saw 17 people vie for five seats. This year, with three seats up for grabs, the field is expected to be smaller.

Capers’ mother said he has had to fight for everything in his life. For example, he was born just one pound and five ounces and had to fight to survive. He has put that fighting spirit behind his efforts to improve the school district for Paterson’s young people, said the mother.