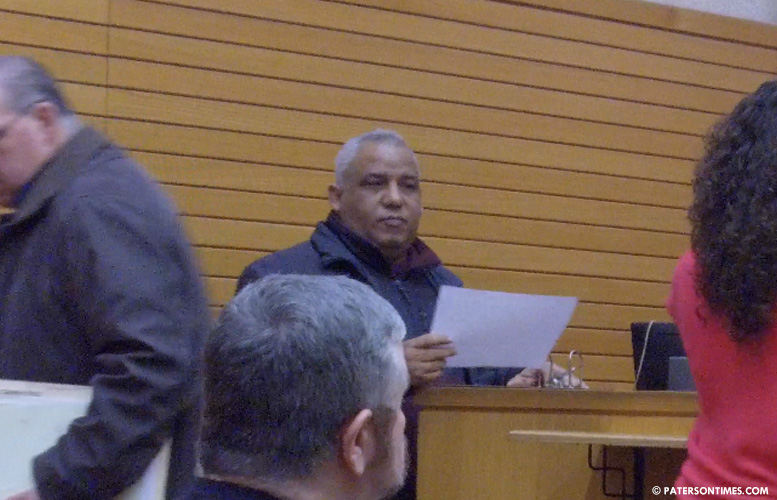 An illegal television studio used by former councilman Alex Mendez to film a show during the mayoral race last year has been closed down.

Municipal officials said the studio at 482 Main Street was shut down in Nov. 2018 and its operator was issued multiple summonses.

On Friday, the operator, Fausto Cruz, pleaded guilty to operating the studio without getting proper zoning permits before a judge at the Paterson Municipal Court.

Cruz (pictured) was issued four summonses, three of which were dismissed by the court. He has to pay $350 in fines, according to officials.

It’s not clear why only a single violation was sustained.

Municipal court prosecutor Vincent Stampone did not respond to a call for comment on Monday.

“That’s what they typically do. A lot of people come through there and don’t pay. The price of doing business here is one ticket,” said one city official.

Some council members have criticized municipal prosecutors in the past for dismissing tickets and minimizing penalties, arguing it costs more in manpower to issue a ticket than the amount of fees collected by the court. Minimal penalties also allow some violators to presume the tickets are a cost of doing business in the city, they argue.

“I’m reluctant to criticize the court. I’d imagine they have taken all factors into consideration in deciding what they want to do,” said William McKoy, 3rd Ward councilman. “My hope is there was good reason for consolidation.”

Officials at the Community Improvement expressed frustration at the court’s lenient treatment of violators. Fine ordinances in the city are outdated and penalties are minimal to begin with — dismissing majority of the tickets fails to deter violators, they said.

Cruz failed to show for his first court appearance. He appeared after a $1,000 warrant was issued against him, according to officials.

It’s not clear what was Cruz’s arrangement with Mendez. Campaigning for the city’s highest office, Mendez ran a dedicated television show out of Cruz’s studio.

Mendez did not respond to a request for comments on Monday.

Some of them attended the studio at Mendez’s invitation.

“I was not aware,” said Rivera when asked whether he knew it as an illegal studio on Monday.

“If I go to a grocery store, I don’t check their licenses,” said Ramirez. He said he was not aware it was an illegal shop.

Mendez filmed his own show at Cruz’s studio. He also appeared on Cruz’s “La Llava” TV show. Mendez came in second place in the mayoral race.