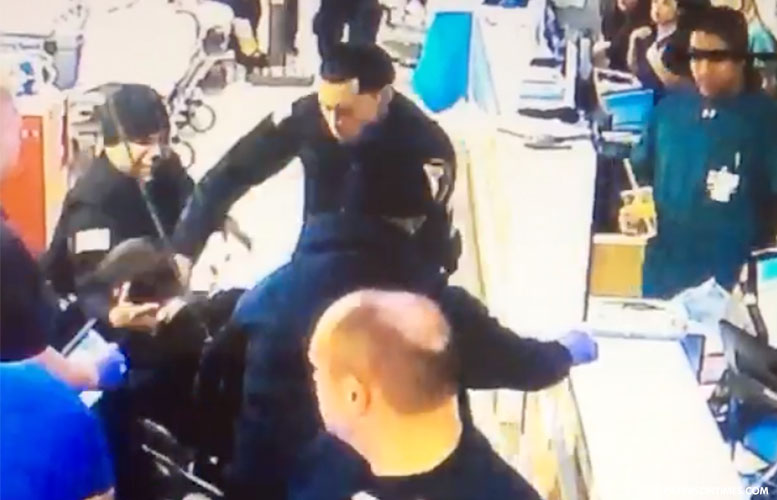 Former police officer Ruben McAusland, who was sentenced to more than five years in prison on Wednesday afternoon, is seen assaulting a suicidal man in two videos.

McAusland punches the victim, Andrew Casciano, in the waiting area of St. Joseph’s Regional Medical Center in front of a number of people, in one video. In another video, McAusland is seen twice striking the victim across the face.

Both videos, posted below, were shown at McAusland’s sentencing.

McAusland punches the victim in the hospital’s waiting area:

McAusland twice punches the victim in the patient room:

The incident happened on March 5, 2018. A suicidal man called 911 and was taken by an ambulance to St. Joseph’s Medical Center. Two officers, McAusland and Roger Then, responded to the victim’s home and followed the fire department ambulance to the hospital to monitor him.

A pair of videos captured at the hospital that night showed the victim in a wheelchair. In the first video, the victim throws an object down the hallway. Angry at the victim’s conduct, McAusland pushes the wheelchair with his hands and punches the victim in the face.

As the victim fell towards the ground, Then grabbed him by the back of the neck and pushed him to the ground.

“You have the right guy today,” responds McAusland. Then turns the cellphone towards himself and smiles.

McAusland puts on a pair of gloves and violently strikes the victim twice across the face, according to charging documents.

Both officers submitted false police reports that did not include their attacks on the victim. Then is expected to be sentenced next week.

McAusland apologized to the victim, who continues to suffer from the incident. Casciano suffered multiple injuries to the face, including an eye injury, and required surgery.

The judge ordered McAusland to pay $32,892 in restitution to Casciano for the latter’s medical expenses.