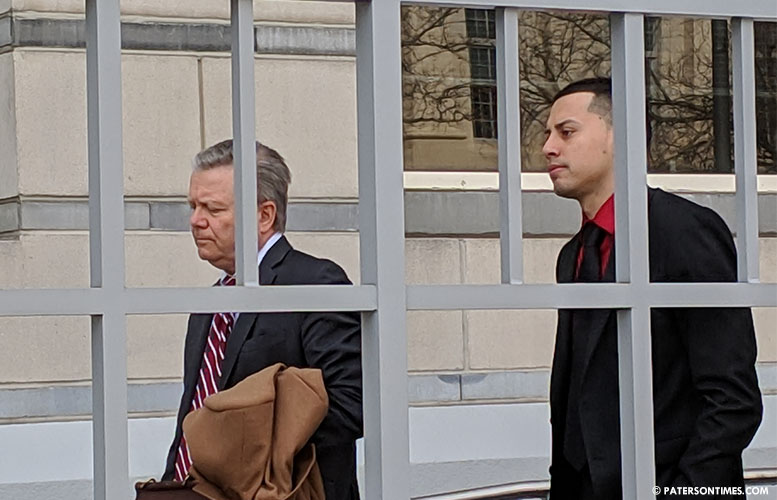 A federal judge sentenced Ruben McAusland, one of six police officers ensnared in an FBI corruption investigation, to 66 months in prison on Wednesday afternoon.

McAusland, 27, of Paterson, dealt drugs using his squad car and viciously attacked a suicidal man at St. Joseph Regional Medical Center. He had pleaded guilty last summer to information charging him with possessing with intent to distribute narcotics and deprivation of civil rights under color of law.

“Why did you do it?” interjected judge William H. Walls.

McAusland explained the person he sold the drugs to was a high school friend. His attorney, John Whipple, argued, sometimes, police officers, especially in urban communities, have difficulty separating themselves from early relationships formed while at school, participating in sports, and parties.

“I didn’t want to detach myself from my friends,” said McAusland. He did not want his friends to think he was shunning them after he had “made it” as a police officer.

Both the defense and the prosecutors in the case argued for leniency.

Agarwal said McAusland gave the FBI access to his phone. Inside the phone were videos of an assault at St. Joseph Regional Medical Center.

McAusland and his fellow officer, Roger Then, assaulted Andrew Casciano.

Walls refused to accept Agarwal’s argument. He stated McAusland did not fully expose corruption in the police department, refuse to testify in prosecution, and did not provide other information about Then.

“I have more sympathy with the common guy on the corner that we pick up than this police officer,” said Walls.

“Why did he participate so willingly?” asked Walls. “He had a complete inventory that a street hustler would envy.”

From late 2017 through early 2018, McAusland dealt heroin, crack-cocaine, powder cocaine, and marijuana, according to the FBI. The FBI caught McAusland by using an informant, who cooperated with law enforcement in hopes of obtaining a more favorable outcome to a recent drug conviction.

McAusland, who joined the police force in 2014, sold the drugs he confiscated from dealers. He was placed on unpaid suspension following the arrest. He was terminated from the force following a guilty plea in Jun, 2018, according to municipal officials.

“I think Ruben was encouraged to become a police officer when in fact that wasn’t his life’s aspiration,” explained Whipple in answering the judge’s question.

McAusland’s brother is a longtime police officer in Paterson. His father is “great man,” said Whipple, suggesting both may have steered him in the direction of becoming a police officer.

“He must be punished. The punishment must sting,” said Walls. “He has to pay the price that will deter others, hopefully.”

When McAusland began to speak, the judge asked him about the assault.

“He had struck me in front of everybody,” said McAusland to the judge. Two videos were played in the court room.

One showed surveillance footage of McAusland punching Casciano, who is in a wheelchair in the waiting area of the hospital. The other officer, Then, is seen grabbing the victim by the neck and pushing him into the ground.

Casciano is then taken to a patient room. In the second video, Casciano provokes McAusland by calling him a bitch.

McAusland twice strikes Casciano in the face in the visceral video.

“He had the temerity to assault a suicidal victim,” remarked the judge before the video was played in the courtroom.

Walls pointed out McAusland attacked a defenseless man in a wheelchair.

McAusland apologized to the victim, who continues to suffer from the incident. Casciano suffered multiple injuries to the face, including an eye injury, and required surgery.

The judge ordered McAusland to pay $32,892 in restitution to Casciano for the latter’s medical expenses. McAusland also consented to give up $13,650 in drug proceeds.

McAusland asked the judge for “mercy” and “second chance.”

“I didn’t think of the repercussions of my actions,” said McAusland. He told the judge a long sentence may mean he never sees his grandmother, who is close to him, after coming out of prison.

“This is the only major mistake I ever made,” said McAusland.

“This is a hack of a mistake,” replied Walls.

The judge had the option to sentence McAusland to 57 to 71 months in prison.

“You’re not getting a draconian sentence,” said Walls.

McAusland has to surrender to federal authorities to serve his sentence on May 20. He will be serving his time at Fort Dix.

His partner, Then, pleaded guilty on Dec. 6, 2018 to misprision of felony for concealing civil rights violations. He is scheduled to be sentenced on Apr. 2.

McAusland and Then are two of six police officers ensnared in the corruption probe. Others are Daniel Pent, Jonathan Bustios, Eudy Ramos, and Matthew Torres.

Police brass have said the FBI investigation that netted the six officers originated from within the department.

Police officials referred the case to the FBI.

“Through prosecutions like this one, police officers like McAusland – who dealt drugs, stole from a crime scene, and viciously attacked a person who sought help from the Paterson Police Department – are removed from positions where they can violate the public trust and deprive others of their civil rights under color of law,” said U.S. attorney Craig Carpenito in a statement after the sentencing. “We will continue to vigilantly pursue these cases, recognizing that the people of Paterson, and all of New Jersey, deserve better.”