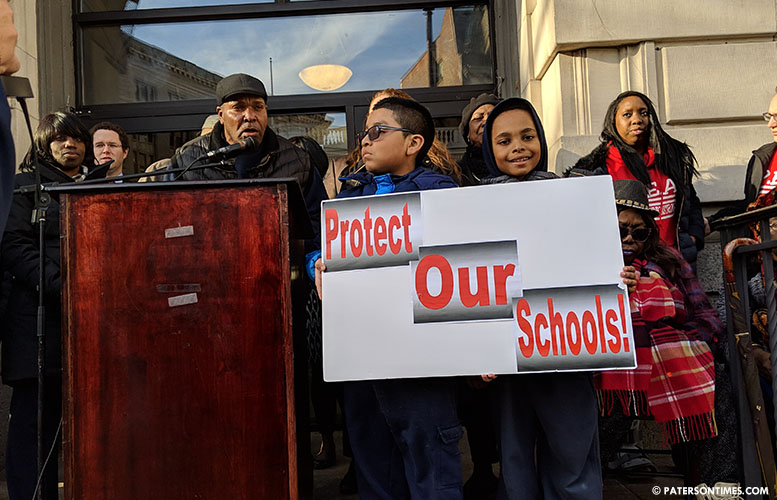 Four bus loads of people, mostly teachers and community leaders, appeared before the New Jersey Assembly Budget Committee in Trenton on Wednesday to demand more funding for the school district to avert hundreds of layoffs and program cuts.

School officials balanced the preliminary 2019-20 budget by cutting 232 jobs, including 120 teachers. The district cut or scaled back programs like purchasing text books, intervention to help students struggling in math and reading, SAT preparation, art and music, and science lab upgrades.

“These cuts will devastate the Paterson public schools,” said Rosie Grant, executive director for the Paterson Education Fund, to the committee.

Superintendent Eileen Shafer told the committee she needs $28 million to avert the layoffs and program cuts.

Homeowners will have to pay 14-percent more in school taxes.

Shafer has said classrooms may have 30-40 students next year.

“It will make teachers want to leave the district,” said Karen Agosto, mother of two district students, outside the City Hall in Paterson.

Community leaders held a rally outside the City Hall on Wednesday afternoon to protest the impending cuts and demand more funding from the state government. Earlier in the day, as many as 200 people went to Trenton in four school buses to ask state officials for more funding.

“It’s just an untenable situation,” said Cohen. “Too many people in one room is not conducive to learning.”

Having 40 students in a classroom will be dangerous in the event of fires and lockdowns, said Cohen.

“Paterson doesn’t even have that,” said Taylor. He also pointed out the district has little or no technology for students to prepare them for the future.

Last year, Shafer began an initiative to provide every middle and high school student with a laptop.

School leaders, parents, and teachers were joined by municipal officials at the rally.

“Those 28,000 kids belong to all of us. We have to fight to make sure they get the treatment that’s fair,” said councilwoman Ruby Cotton.

“If we don’t fight now, they are going to lose later,” said councilwoman Lilisa Mimms.