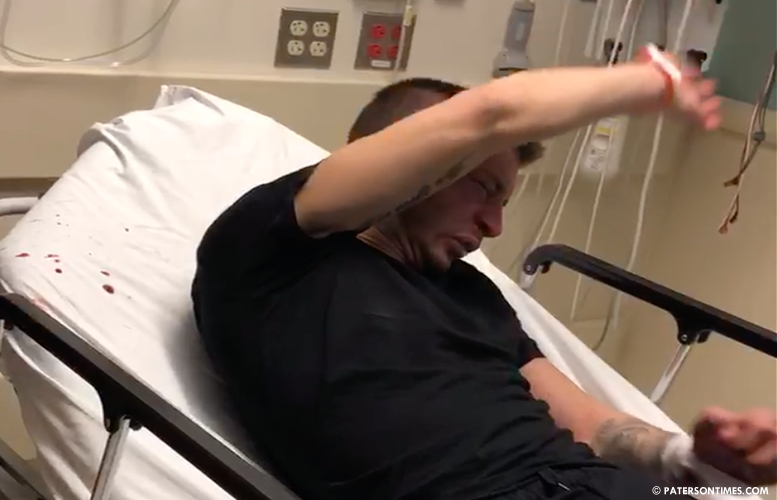 The man being viciously attacked by a now-convicted police officer at St. Josephs’ Regional Medical Center in a pair of videos is expected to file a lawsuit against the city seeking damages.

“The lawsuit will be filed next week,” said attorney Steven Greene, who is representing the victim, Andrew Casciano.

Greene filed a notice of claim with the city for $4 million. His client will seek an unspecified amount in damages in the lawsuit.

“As is our general policy, we do not comment on pending litigation,” said mayor Andre Sayegh’s chief of staff Kathleen Long on Thursday in response to a request for comment on the pending lawsuit.

Sayegh has condemned the actions of the six police officers arrested in the FBI corruption investigation.

“There is no place in the Paterson Police Department for corrupt police officers, period,” said Sayegh in a statement earlier in the week. “We are all committed to restoring the community’s faith in those sworn to protect and serve the residents of Paterson.”

Sayegh has called for a “top-to-bottom audit” of the police department.

The claim arises from an incident, videos of which have shocked the city, that took place on Mar. 5, 2018.

Casciano, who was suicidal, called 911 and was taken by an ambulance to St. Joseph’s Medical Center. Two officers, Ruben McAusland and Roger Then, responded to the victim’s home and followed the fire department ambulance to the hospital to monitor him.

At the hospital, McAusland and Then repeatedly assaulted the victim. Their actions are captured in two videos.

In the first video, captured by hospital surveillance cameras, Casciano throws an object down the hallway. Angry at his conduct, McAusland pushes the wheelchair with his hands and punches Casciano in the face. As the victim fell towards the ground, Then grabbed him by the back of the neck and pushed him to the ground.

Casciano is then taken to a patient room. In the second video, captured by Then on a cellphone, Casciano is on his back in a hospital bed.

McAusland puts on a pair of gloves and violently strikes the victim twice across the face as blood splatters on the white pillow.

“Calm your ass down,” McAusland tells him.

McAusland was sentenced to five and half years in prison by judge William H. Walls for the assault and dealing drugs.

The judge asked him about the assault.

“He had struck me in front of everybody,” replied McAusland. He claimed the victim threw a box of gloves at him in front of other people.

McAusland’s partner, Then, is expected to be sentenced to prison next week.

“I don’t understand how any clear-thinking human being can smile into the camera the way that officer Then did,” said Greene. “It’s disgusting.”

Then did not stop McAusland from attacking the victim in the patient room. Both officers filed false police reports of the incident.

McAusland has been ordered to pay $32,892 in restitution to Casciano for medical expenses.

Casciano, who still suffers from the injuries, could not make it to court to see McAusland get sent to prison for his actions.

McAusland apologized to Casciano in the courtroom, where prosecutors played both videos for the judge.

“We see a lot of videos, pictures, and evidence throughout the course of our careers as prosecutors when we’re investigating cases. When I saw this one, I never want to see it again. This is the sort of video that sticks with you,” said federal prosecutor Rahul Agarwal in the courtroom.

Casciano sent a letter to the court that was read out loud by the prosecutor.

“The day of the assault, I was at a very low moment in my life given the problems. When this incident occurred, it felt like I was being degraded to an even lower level,” said Casciano in the letter. “Police officers are supposed to protect and serve not assault and humiliate,”

Casciano is going through an “uneasy recovery.” He continues to suffer from headaches and post-traumatic stress disorder.

“The officers, who abused me, created a negative memory that often haunts me throughout the day,” said Casciano.