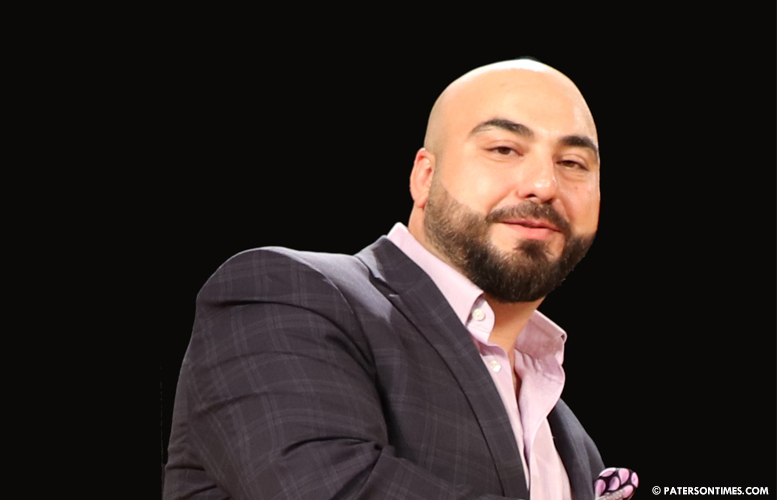 The woman, identified in the case as B.B., a former science teacher, accuses Necimo of sexually harassing her on numerous occasions at the Paterson Arts and Science Charter School on Grand Street.

Her lawsuit cites more than half-dozen incidents of sexual harassment. She did not seek his attention nor did she encourage it, says the lawsuit filed on Tuesday.

On one occasion, Necimo came into her classroom during prep period, closed the door behind him, and sat on her desk in a sexually suggestive manner.

Necimo asked her if she had “stripper friends” and if she was a “stripper,” according to the lawsuit.

On another occasion, Necimo followed her at the end of the school day and blocked her from getting to the driver side door of her car.

When the science teacher told him she was not gay, Necimo, in a sexually suggestive manner, remarked, “Oh, so you do like guys?” according to the lawsuit.

Necimo continued to block her driver side door while forcing a captive conversation.

His violent sex references made the teacher uncomfortable.

On yet another occasion, Necimo remarked, “Look at [B.B.]. Don’t she look fine?” at the end of a fire drill as she walked her class inside the school. His conduct in front of the class prompted the students to say, “Mr. Necimo likes you!” to their teacher.

Some of the children in the class would make comments like the science teacher and her alleged tormentor were “getting together.”

“She lost her students. The students would constantly make comments,” said attorney Anthony Bocchi, who is representing the science teacher in the case. He said Necimo should never work in a school environment. “He is unable to perform his duties in a way that’s appropriate.”

Necimo could not be reached for comments on Thursday morning.

The lawsuit says Necimo’s sexual harassment went beyond the school building. One day, Necimo invited the teacher to attend his birthday party on the weekend. She politely refused the invitation.

Early next morning, the teacher received a series of texts from Necimo. He was mad at her refusal to attend the party, he told her via text.

Necimo also told her he was “drunk” and naked on the floor.” He told her to come to his house in Pennsylvania in the evening for a potential sexual encounter, according to the lawsuit.

Uncomfortable and shocked, she did not reply to the text messages, says the lawsuit.

On Monday, Necimo apologized to her for the drunken text messages.

“It wasn’t me. It was the Hennessey,” Necimo told her.

Necimo engaged in relentless sexual harassment on a regular basis, says the lawsuit. He often passed comments about her outfits, expressing such things as she was “working that dress” and she “looked like a runway model” and her sundress “hugged her nice.”

He also tried to pry into her personal life by asking her about her dance background and whether she was “seeing someone.” She received flowers at the school one day prompting Necimo to inquiry as to who sent it and whether he was “big” and “tall.”

The constant unwanted sexual advances and harassment led to her developing anxiety that hindered sleep at night. His sexual harassment occupied her mind as she struggled to sleep. At work, she began to avoid Necimo, sometimes by hiding in her classroom with lights turned off during break periods.

“He’d approach her when he knew she was alone. It made her so uncomfortable she’d hide in the corner of her classroom with the lights off, so when he’d walk by, peep his head into the classroom, he wouldn’t see her,” said Bocchi.

On Jun. 23, 2017, unable to take the constant sex harassment and unwanted advances, the science teacher, who has been identified by the Paterson Times, resigned. She was first hired at the school on Aug. 21, 2014.

The school may not have an anti-harassment policy, alleges the lawsuit. “It certainly is not enforced and there certainly isn’t proper training,” said Bocchi.

Nihat Guvercin, chief executive officer for iLearn Schools, did not respond to a call for comment on Thursday morning.

News coverage of the receptionist’s case led to parents lodging complaints to iLearn Schools. Necimo resigned less than a month after the Paterson Times covered the receptionist’s case. Necimo was hired by the school on Aug. 1, 2015 for $91,000. He lives in Wayne. He is married to Semra Necimoglu, who works for the Paterson Charter School for Science and Technology, according to public records.

Necimo uses several aliases including Danny Necimoglu and Dogan Necimoglu. His case has received widespread attention in the Republic of Turkey.

The earlier allegations against Necimo was picked up by the Turkish media because of his ties to the exiled Islamic scholar Fethullah Gülen. The government of Turkey has targeted followers of Gülen after blaming the group for the failed 2016 coup against president Recep Tayyip Erdoğan.

The iLearn Schools is affiliated with the Gülen movement, according to U.S. and Turkish media reports. However, a lawyer for the school disputed the school’s association with the controversial Islamic scholar.

The science teacher, who names both Necimoglu and iLearn Schools in her lawsuit, is seeking an unspecified amount in damages.