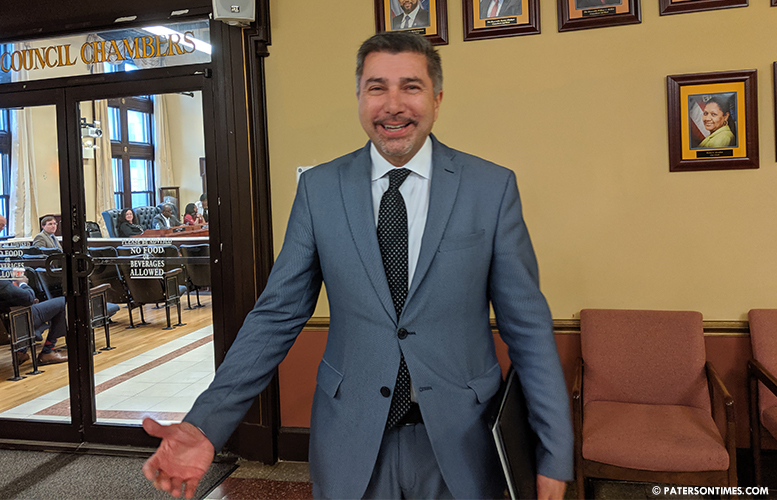 Sayegh’s administration presented the nominee to the City Council on Tuesday night. Rodriguez told members of the City Council he is well-suited for the $45,900 part-time position given his experience dealing with a diverse community in Passaic City.

Passaic City has a large Hispanic, Indian, and Orthodox Jewish community, he pointed out.

“I have that experience,” said Rodriguez, 58. He told members of the City Council he planned to move into Paterson in August, a response that took the steam out of some criticism levied against him by councilman Michael Jackson.

“Is there any reason why you were not re-appointed by mayor Lora?” asked Lilisa Mimms, councilwoman at-large.

“He wanted to have his own people. His own judges,” replied Rodriguez.

Rodriguez was first appointed by Samuel Rivera and later re-appointed by Alex Blanco. He served as a judge in Passaic City from Jul. 2001 to Feb. 2018, according to his resume. He has a bachelor of arts in business administration and English from Rutgers University, New Brunswick and a juris doctorate from Rutgers Law School in Newark.

Rodriguez runs a private practice out of Clifton.

“Have you had a lot of complaints in New Jersey Bar?” asked Luis Velez, 5th Ward councilman.

Rodriguez replied in the negative. He said he had zero complaints filed against him at the New Jersey Bar Association. He admitted to the reprimand he had received from the New Jersey Supreme Court Advisory Committee on Judicial Conduct in 2008 without going into details.

Rodriguez was publicly disciplined for his display of support for corrupt former mayor Rivera.

On Sept. 7, 2007, a photograph in the Bergen Record showed Rodriguez standing, with a councilman and a campaign treasurer, outside of Rivera’s home on the day of his arrest.

Rodriguez told the committee he had gone to Rivera’s home at the suggestion of the mayor’s driver to console the first lady. He did not anticipate the presence of political figures or the media at the time of his visit.

“The context inescapably implies that even though” Rodriguez’s “intent was to convey privately purely personal feelings of sympathy, his actions were undertaken in a setting that could be seen to demonstrate political as well as personal support for the Mayor,” read a decision issued by the New Jersey Supreme Court. Rodriguez’s “presence at Mayor Rivera’s house on the day of the Mayor’s arrest for allegedly taking a bribe created the appearance or perception of impropriety that had the potential to weaken public confidence and to negatively derogate from the integrity and independence of the judiciary.”

Rodriguez should have known it was “highly improper” for him to visit Rivera’s house on the day of the arrest, according to the committee’s decision.

“I think this is an example of a broken promise. We have a number of people, who are fully capable, who are from this city,” said Jackson. His argument was weakened by Rodriguez’s earlier response that he intended to relocate to Paterson. “I have some concerns.”

Jackson said Rodriguez has been the subject of a number of complaints on a website. A website listed eight complaints against Rodriguez from 2008 through 2017.

“You’ve been a judge for sixteen and half years. It’s a tough position. You’re giving people fines. Putting people in jails. No body likes it. There’s going to be bad comments about you on various websites,” said Shahin Khalique, 2nd Ward councilman. “I see 16 years of service and only 8 bad comments. That’s a great number.”