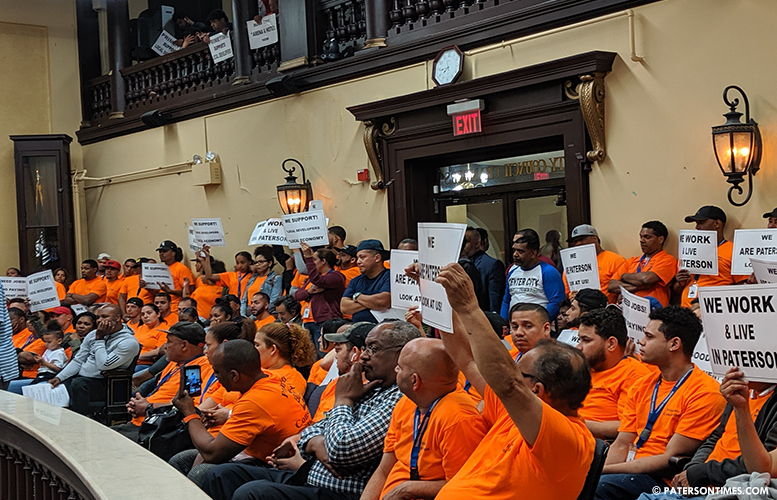 Dozens of people packed City Hall on Tuesday night to protest mayor Andre Sayegh’s move to withhold support for a big expansion of the Center City Mall to include an arena and hotel.

Sayegh hasn’t provided the developer, Alma Realty, a letter of support for the $100 million project. The developer needs the letter to apply for $40 million in state tax breaks.

“We want your support,” said Ekaterina “Kat” Valiotis to the City Council. Her family has been investing in the city since 1999. “I thought I had the support. Time is ticking. There’s four weeks left. And I need a letter of support from the city.”

Sayegh spoke in favor of the Center City expansion project two years ago. At the time, he said it would generate much-needed tax revenues and jobs.

The developer plans to build a branded 150-room hotel atop the existing mall and a 12,000-seat multi-purpose arena for soccer games, football, concerts, and events. Currently, Center City Mall has 640 underground parking spaces on two levels that would be increased by 600 for a total of 1,240 parking spots.

Center City Mall expansion will create 400 new permanent jobs, according to the developer. The mall currently employs 300 people. Many of the protesters, clad in orange shirts, appeared to express their support for the project for the jobs it will bring to the city.

The developer is offering $1.5 million a year to the city to operate and maintain lots in downtown Paterson. The development is proposed on lots owned by the Paterson Parking Authority.

Tony Perez, director of the Paterson Parking Authority, could not be reached for comments on Wednesday.

The city will collect approximately $200,000 a year in revenue from a hotel room tax, according to the developer.

“I’m hoping this endeavor brings revenue and jobs. Because if we can chip away at the unemployment rate in our city, that’s one way to remediate some of the problems we have,” said Sayegh, at the time a member of the City Council, in Sept. 2017.

Sayegh did not respond to a call for comment on Wednesday morning.

“We’re in an active process of reviewing requests for letters of support for the ERG tax credit applications and will not comment until the process is complete,” said Sayegh’s chief of staff Kathleen Long.

Council members were baffled at the mayor’s stance.

“I don’t know why the mayor, as of right now, hasn’t embraced this,” said council president Maritza Davila. “I don’t think he has disregarded this fully.”

Sayegh administration officials have been in contact with Alma Realty over the past weeks. The mayor has provided letter of support for just one project, the Ward Street garage, according to officials.

Some members of the City Council expressed their support for the Center City expansion.

“You have my support from now,” said Luis Velez, 5th Ward councilman. He addressed the mayor, who was not present at the meeting, urging him to direct the tax credits to existing city developers.

Velez said he will not support the mayor steering tax credits to outside entities.

“You have my full support,” said Michael Jackson, 1st Ward councilman. He represents the area where the mall is located. “We in the community need to rally behind this project.”

Some community activists spoke in favor of the project.

McKoy said the council will set a “dangerous precedent” because the city continues to solicit proposals. Developers were told to submit project briefs to the city by April 12 to be considered for the $130 million tax credits. Municipal officials said that wasn’t a “hard deadline” for project submissions.

The Sayegh administration hasn’t kept the council in the loop about the tax credit projects, said Rivera.

“As a council, we need to be included in the things that are being done in the city,” said Rivera.

But economic development director Michael Powell said he has briefed the Economic Development Committee on some of the projects like renovation of Hinchliffe Stadium, Visitor Center at the Great Falls, Ward Street development, and the South Paterson parking deck.

Many of the protesters at City Hall were tied to prominent developer Charles Florio. He is not a fan of Alma Realty, but said the mayor is not being transparent.

“My friend Andre. His administration is doing what? Raising taxes, cutting services, and making doing business in the city a little bit harder,” said Florio.

Florio said Alma Realty has been investing in the city for decades regardless of the success of the mall. “It looks bad when they can’t get a letter of support for a project,” he said. “It just doesn’t look good.”